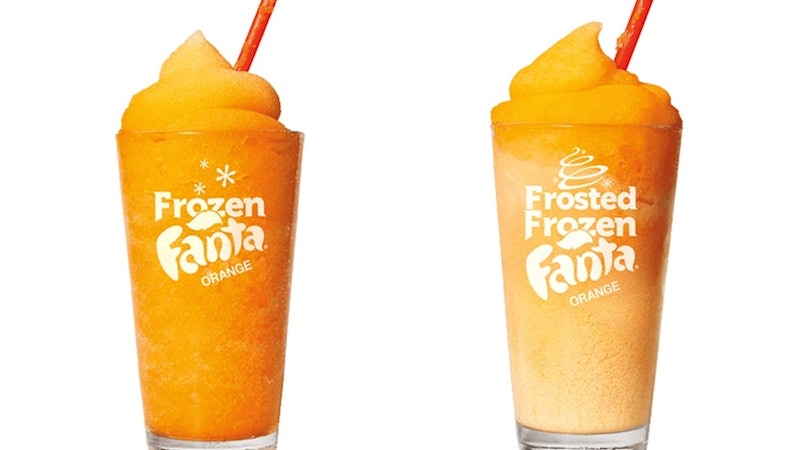 Summer time is the best time of year for just about every reason it has going for it. Warmer weather, pink shoulders and noses, new freckles to add to the ones already sprinkled on your skin. It is a time for fresh flavoursome food washed down with icy cold drinks. If your drink isn't sweating, you probably are. I mean, TBH there is no way you haven't been sweating over the last week or so. And isn't it glorious? I bet you are lusting over frosty drinks like frozen Fanta. But is frozen Fanta available at Burger King UK?

The drink, which is available in the U.S., is like a delicious Fanta Orange/slushie hybrid. All blended up and brain freezingly delicious. That's a ten out of ten for me. Something that is refreshing, sweet, and has no booze in. For a change. I contacted Burger King to ask if there was any chance of us getting this delicious concoction and here's what they had to say:

"'We are currently trialling Frozen Fanta in a number of select UK restaurants. We've had a great response from our customers and have plans to roll it out to more Burger King restaurants in the coming months.'"

Well look at that, finally some good news. It's also available in loads of those restaurants. Here's the full list, so you can get your Frozen Fanta fix ASAP.

As the drink isn't advertised on the Burger King website, I wasn't holding out high hopes, especially last year a Fanta Lemon version of the same drink was launched stateside and didn't make it to these shores. Much to the anguish of fans of delicious drinks. However, even if your local Burger King isn't on the list above, there are still plenty of Burger King treats you can get your hands on.

The brand caters for fans of milkshakes — sorry these are not for the lactose intolerant nor vegan people of this world but if you're not in those camps then listen up. So as well as their standard vanilla, chocolate, and strawberry flavours they also have some totally freaky fusion shakes. Make sure you've got a napkin handy because you might be about to drool all over the place. Guys they have not only Oreo flavour, but also Crunchie flavour milkshakes. Shut the front door, stop it now, and put a fork in me — I'm done.

The burger slingers are also of course best known for their not so healthy but oh so delicious culinary delights. Recently, they have even added a halloumi burger to the mix. Which is available in single, double, and as an add on to your regular burger.