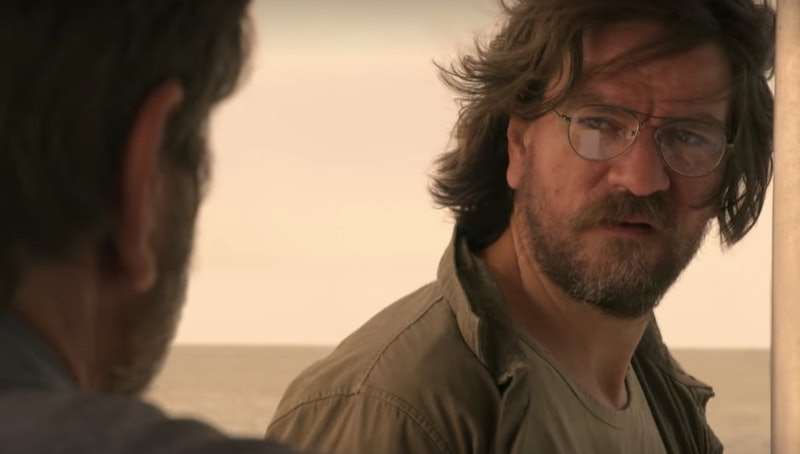 Spoilers ahead for Outer Banks Season 1. One of the biggest mysteries in Netflix's new YA series, Outer Banks, is what happened to John B's dad. His disappearance nine months before the events of the series helps to kick off the Pogues season-spanning adventure: he'd been obsessed with finding The Royal Merchant's treasure before he went missing, and after finding the clues he left behind, John B ends up finishing what his father started 20 years ago.

Of course, John B does this while remaining convinced his father is still out there somewhere. And though he was right to be suspicious of Big John's mysterious disappearance, he, unfortunately, turns out to be wrong. In Episode 8, a flashback reveals that Ward Cameron (Charles Esten) and Big John had been working on finding the Royal Merchant together. But when Big John told Ward he'd found the long-lost gold, they got into an argument. Ward claimed that they'd planned on splitting the bounty 50/50, but Big John shot back that he should get 80%, because he'd been searching for the treasure for the past 20 years, long before Ward got involved.

This did not sit well with the greedy Kook and he pushed Big John, who tripped backwards and hit his head on the edge of the boat they were on. Believing he was dead, Ward pushed Big John's body overboard. However, we later learn that John B's dad actually survived and washed up on a nearby island, à la Castaway. It's there that Scooter Grubbs found his remains on the eve of Hurricane Agatha; he didn't survive the storm, but he did use his final moments to inscribe "Redfield" into the secret compartment in his compass, which John B then found in a bag on Scooter's sunken Grady-White.

Despite the fact that Denmark Tanny (he of The Royal Merchant) built the house the Camerons now own, Ward wasn't smart enough to find the gold on his own. He only joined the treasure hunt to provide the money and resources John B's dad needed to finish his decades-long expedition. Like a parasite, he leeched off first Big John and then his son, who were both equally obsessed with finding the rumored $400 million that had sunk to the bottom of the Atlantic in 1829. When the Pogues ultimately find the gold beneath Mrs. Crain's house (thanks to Big John's inscription and the ensuing map and tape he'd left his son in their family crypt), Ward traces their steps and takes the treasure for himself.

Fortunately, his plan is foiled, and by the end of Season 1, it's John B and Sarah who end up heading to the Bahamas to the awaiting gold.