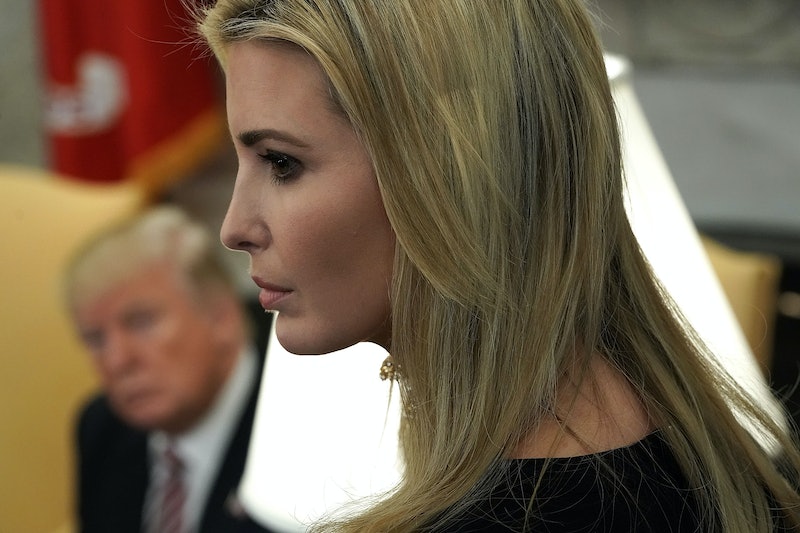 If you raise the question of what's the hardest job in the world at a dinner party, you're sure to illicit a good debate. But while the average dinner guest might toss out roles like firemen, Alaskan fishermen, or coal miner, President Donald Trump's eldest daughter has teased that she's got everyone beat. While speaking at Saturday's Gridiron dinner in Washington, D.C., Ivanka Trump joked that being Trump's daughter is "the hardest job in the world."

"The press seems to think it's ironic that I, born of great privilege, think people want to work for what they are given," The Washington Post reported she said. "As if being Donald Trump's daughter isn't the hardest job in the world."

Ivanka's quip about having "the hardest job in the world" came after she'd explained to guests that her father had only asked her to appear at the dinner in his place that afternoon. "No, this isn't a joke," she deadpanned when the audience began to chuckle.

In fact, the president's daughter claimed she'd been asked to fill in so late that she hadn't had any real time to write any jokes for her speech. "So, I figured the funniest thing I could do was read excerpts from the Green New Deal," NPR reported Ivanka said, taking a swipe at legislation proposing a series of economic stimulus programs put forth by Rep. Alexandria Ocasio-Cortez and Sen. Ed Markey.

Earlier in the day, while speaking at the Conservative Political Action Conference (CPAC), President Trump had also taken a swipe at the Green New Deal. In a speech Rolling Stone described as lengthy and largely ad-libbed, Trump derided the Green New Deal as a "high school term paper written by a poor student" and Ocasio-Cortez as "a lunatic."

But the president also said that he encouraged what he saw happening "on the other side", referencing the Green New Deal. "I think it's really something that they should promote, they should work hard on. It's something our country needs desperately," Rolling Stone reported he said, adding that he would "take the other side of that argument only because I'm mandated to."

"But they should stay with that argument," Trump continued. "Never change. No planes, no energy, when the wind stops blowing that's the end of your electric. 'Darling, is the wind blowing today? I'd like to watch television, darling.' It's the truth."

According to Ivanka, the president was disappointed about having to miss the Gridiron Club and Foundation's annual white-tie dinner, which traditionally brings politicians and the club's elite group of Washington journalists together for a little good-natured roasting. "The opportunity to poke fun at the media isn't something he passes up lightly," NPR reported she said. But fear not. Trump won't miss out on all the fun. "For my father, every day is a Gridiron dinner," Ivanka quipped.

The president's eldest daughter, who also serves as an advisor to the president, reportedly attended Saturday's dinner alongside her husband, senior White House advisor Jared Kushner.