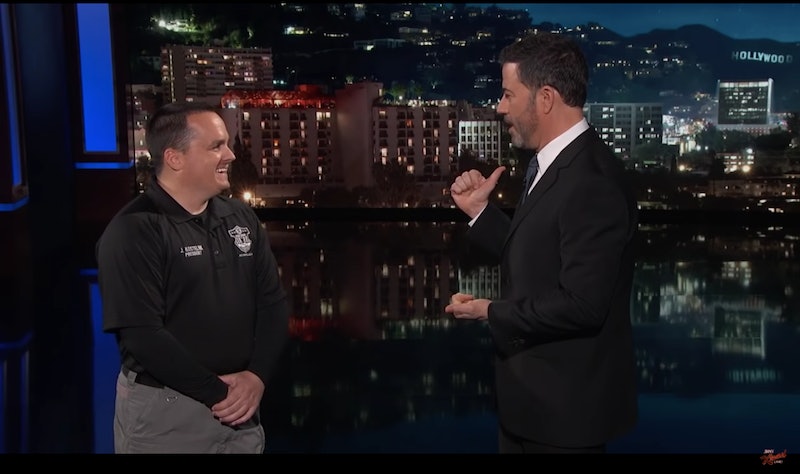 Kimmel opened his show on Monday evening by stressing that around 800,000 federal employees are currently working without pay. "It’s unfortunate that these people, these workers who have nothing to do with this ridiculous wall, aren’t getting paychecks, especially right after the holidays,” Kimmel emphasized.

The host then added that he wanted to do his part to "pitch in" and assist furloughed federal workers. Kimmel announced his plan, revealing that "tonight and every night until the shutdown is over, we're going to put a federal employee to work on the show."

Kimmel's first new "employee" was John Kostelnik, who works as a federal law enforcement officer and local union president at the Federal Correctional Complex in Victorville, California. Kimmel cut right to the chase after he invited Kostelnik on stage.

The host asked the prison official, “Do you object to being used as a pawn in this fight over a wall?” Kostelnik didn't hesitate in his response, saying, "Absolutely." Kimmel also asked Kostelnik whether or not he would receive back pay after the shutdown comes to a conclusion. "We hope so," the law enforcement officer noted.

Kimmel proceeded to get down to the logistics of the evening, questioning whether Kostelnik "played a musical instrument of any kind?" The prison official indicated that he did not, though that didn't phase Kimmel. "We have a tambourine, though, right? You can play the tambourine, right?" Kostelnik responded, "Sure," to which Kimmel enthusiastically replied, "All right, John, you're in the band!"

As Kostelnik joined Kimmel's band onstage, the late night host encouraged him to " ... have fun with it, really go wild, the guys like it." Kimmel then added as an aside to the audience, "That's called solving problems, folks."

In addition to Kimmel, other individuals and organizations are also reaching out to furloughed workers as they wait to return to their jobs. For example, the Washington Post reported that on Tuesday, American University in Washington, D.C. hosted a free, day-long networking and skill-building event for federal employees. The paper noted that workers took classes like public speaking, yoga, and political polling, among others. They were also able to socialize and empathize with fellow federal workers.

The Hill reported that several national banks are offering assistance programs to federal workers and some are considering other measures as well, including cancelling overdraft fees and making low interest loans available. In the Washington, D.C. area, which has the largest percentage of federal workers in the country, various restaurants are offering discounted or free food and drinks for federal employees, Newsweek noted.

As the shutdown lingers, many, like Kimmel and others, are doing what they can to bring some levity and also make things a little easier for furloughed workers. Hopefully their efforts offer a brief respite from the hardship that many of these federal employees are likely facing as they await a return to their jobs.