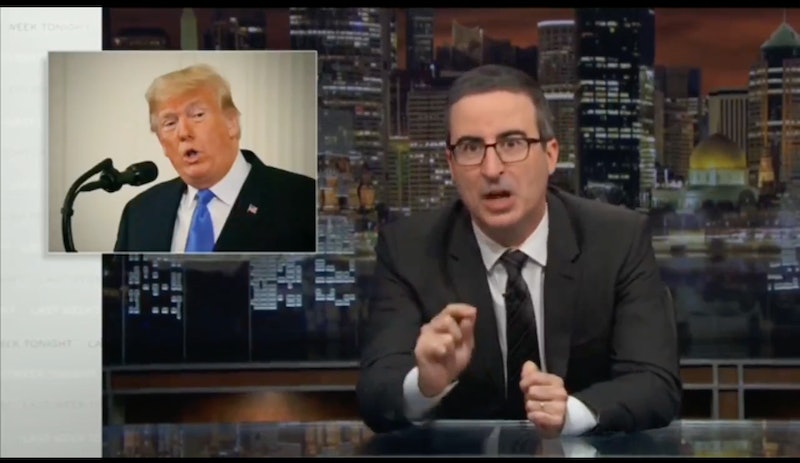 On the latest episode of Last Week Tonight, the show's host took a closer look at the results of the 2018 midterms — and at the president's reaction to them. John Oliver emphasized that the 2018 midterm results should've inspired a reaction far different than the one Trump displayed — and he lambasted the president for refusing to recognize the negative implications of the election for his Republican party.

Oliver opened his show by playing a clip of Trump answering questions at a post-midterms news conference. In the clip, a reporter remarked to Trump that "... last night was not an absolute victory for you." In response, the president pushed back, saying, "I'll be honest. I thought it was a very close to complete victory."

In reflecting on the clip, Oliver seemed flabbergasted — and compared Trump's take on the midterms to playing a game of chess in which you make up all of the rules. As the late night host put it:

Complete victory!? You lost the House. Trump has an incredible ability to frame defeat as triumph. 'Yes, you've taken my king, but I still have all my horses and this is 'horse chess.' So my horse king takes your little guy ... 'horsemate.'

The comedian then explained that he was also surprised by how the president reacted to news that several Republicans who did not seek his support during campaign season had lost their races. "What was even weirder in that press conference was Trump's glee at the losses of Republicans who did not embrace him during their campaigns," the late night host noted before playing a clip of Trump speaking to reporters. "Because bear in mind when you're watching this — these losses were bad for him."

The late night host then played the aforementioned clip, in which the president lists off several Republican candidates who didn't seek out support from him. While speaking at the press conference, Trump asserted:

You had some that decided to ... 'let's stay away, let's stay away.' They did very poorly. Mike Coffman. Too bad, Mike. Mia Love. Mia Love gave me no love. And she lost. Too bad. Sorry about that, Mia.

Oliver then suggested that he found multiple aspects of Trump's comments disconcerting. "I honestly don't know what's worse there," the comedian remarked. "His [Trump's] petty delight in the losses of his own party or his petty delight in his own dumb word play."

The late night host then continued to take the president to task for his remarks, joking:

I bet he [Trump] was in bed that night saying, 'Melania, did you hear that joke about Mia Love where I said, 'She gave me no love?' To which Melania would reply, 'I can't hear you, we literally sleep in different bedrooms.'

It's very apparent that Oliver found Trump's remarks about the 2018 midterm results confounding, particularly because having a Democratic majority in the House will inevitably make it more difficult for Trump's party to move their legislative agenda forward. A Democratic House also potentially subjects the Trump administration to significant scrutiny, as the House has the power to launch investigations. Thus, it remains to be seen whether Trump will continue to frame the midterm results in a positive light or if he will change his perspective as time goes on.