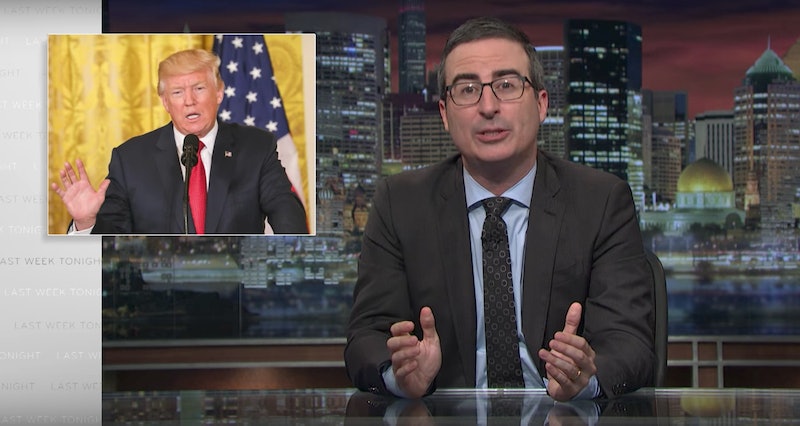 On Sunday's episode of Last Week Tonight, John Oliver briefly discussed the American Health Care Act (AHCA) in his opening segment. In the segment, Oliver particularly criticized Donald Trump's hypocrisy around healthcare, noting how the president's opinion about the AHCA had flip-flopped in recent weeks.

At the beginning of his segment, Oliver noted that, over the past few weeks, Senate Republicans have been working on producing a Senate healthcare bill (the Senate opted to write its own version of a healthcare bill after the AHCA passed the House). However, Oliver pointed out that, in writing the bill, Republicans have encountered some interesting challenges, including, perhaps most surprisingly, criticism from President Trump—someone who previously heavily praised the House's passage of the AHCA.

As Oliver (and many other news outlets) reported last week, during a private meeting with Senate Republicans, Trump referred to the House's AHCA as "mean" and reportedly encouraged senators to "add more money" to the bill to strengthen individual healthcare protections. During that meeting, Trump reportedly also expressed that he was happy to hear that the Senate version of the bill was supposedly going to diverge somewhat from what the House bill proposed.

Oliver went on to make fun of Trump's reaction, saying, "And then he presumably folded his arms and stamped on the ground, screamed until he tuckered himself out and fell asleep right there on the floor."

The host noted that Trump's supposed comments during this meeting stood in stark contrast to his initial reaction to the passage of the AHCA, which involved him celebrating with a speech in the White House Rose Garden as he was flanked by victorious Congressional Republicans.

Oliver also pointed out that Trump's seemingly inconsistent attitude about the AHCA is confusing for both the public and for the insurance industry, the latter of which values "consistency and predicability" above all else. If anything, in the past, Trump has seemed "oddly cavalier" about the "prospect of people losing coverage." So, it's difficult for the public to decipher why he's deciding to care now. For that matter, no one can say for sure whether he's being genuine or can be considered trustworthy at this point.

Altogether, Oliver's segment on the AHCA seemed to readily illustrate Trump's inconsistent attitude toward healthcare legislation. The president has both heavily praised and decried the AHCA as well as seemingly failed to recognize the implication of his and his administration's attitudes on the reactions of the insurance industry and, resultantly, on the lives of everyday Americans. Oliver's piece was insightful, to say the least, and offered an enlightening take on the effect of Trump's unreliable reactions to healthcare legislation.