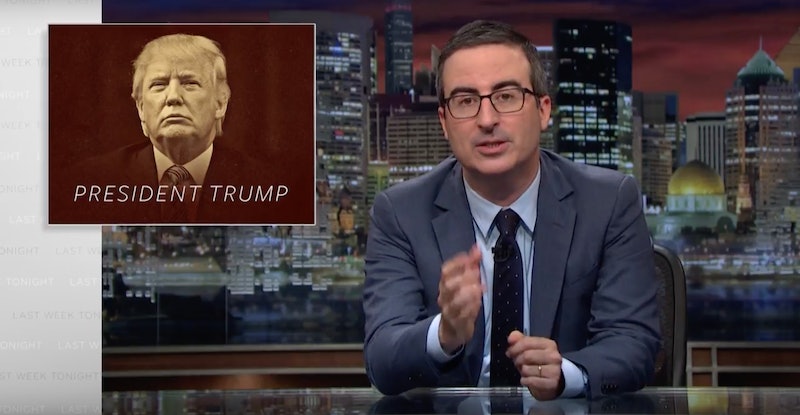 John Oliver joked that the nurse who helped deliver President Trump in the hospital thought that he was the "worst baby." And Oliver thinks she was on to something. "You know, he was the worst baby, and he's still the worst baby now," Oliver joked. But it's not entirely a joke, Oliver explained, noting the "heartbreaking glimpses into how this president operates." Particularly, the host discussed security briefings. In fact, Oliver made a version of a Trump briefing that is certainly hilarious, but should also terrify you.

Oliver introduced the topic first covered by Reuters last week. "We learned that this is how Trump's security team has to brief him on important global issues," Oliver said before running tape of an explanation from MSNBC. "He likes single-page memos and visual aids like maps, charts, graphs and photos. National Security Council officials have strategically included Trump's name in 'as many paragraphs as we can because he keeps reading if he's mentioned.'" Oliver called that "absolutely pathetic" and then gave an example memo:

The leader of North Trump, Kim Jong Trump, is making an intercontinental ballistic Trump. This could seriously jeopardize not just the region, but also the safety of millions of ... Oh God, we're losing you aren't we? TRUMP. TRUMP. TRUMP. Welcome back, sir.

Bustle has reached out to the White House for comment. From there, Oliver moved on to the person most unhappy with Trump being president, Trump himself. "You've seen him enjoy the rallies, and the attention, and the fact that he can say he's the president," Oliver acknowledged before pointing out where that enthusiasm ends, in a photo from inauguration day in which he looks anything but happy.

"It looks like he's at the funeral for every dog," Oliver joked. On top of that, there's also some supporting evidence from an interview taken near day 100 of his presidency. "Tell me if this is a guy who sounds like happy with the situation," Oliver said. He then rolled audio of the Trump interview with Reuters:

I loved my previous life ... I actually — this is more work than my previous life. I thought it would be easier ... I do miss my old life. This — I like to work so that's not a problem, but this is actually more work.

"Yes, of course being president is harder than your old job!" Oliver said, exasperated. "Of course it is. "Your old job was basically having a name, letting other people pay you to use that name, and firing Dee Snyder. It was f*cking easy."

This made Oliver realize that even he has something to relate with Trump about. And maybe you do too. "I actually now have something in common with Donald Trump because I too preferred my previous life before he became president," Oliver said. "Say what you want about Nixon, at least he wanted the f*cking job."

So prepare yourselves to carry on with your frustration. There's no quick way to get through this administration. But at least Oliver will be there with you.