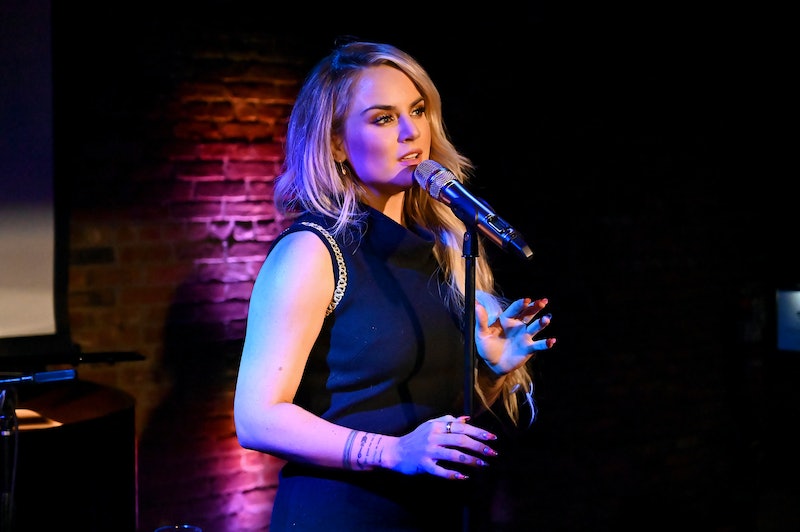 If you're having trouble convincing yourself to stay home right now, this updated earworm from the early 2000s might do the trick. JoJo remixed "Leave (Get Out)" to address the coronavirus and posted a Tik Tok video of herself signing it a capella on March 18, in order to remind her fans to stay at home. The new song — which the singer titled "Chill (Stay In)" — features brand new lyrics that proclaim the importance of social distancing, while also reminding everyone that JoJo's voice is just as incredible as ever.

"I never thought corona could be such a nasty b*tch / but now that she's here, boy, all I want / is for you to use common sense," JoJo sings in the video, which features the lyrics on the screen. "Stay in right now / Do it for humanity / I'm dead*ss about that, but we will survive." In the new track, JoJo acknowledges that fans are "bored at home" but encourages them to "learn how to cook now / and practice good hygiene" in order to pass the time.

And, like the original song, "Chill (Stay In)" is a diss track — only, this time, her target is all of the people ignoring advice to avoid bars and restaurants in order to prevent the spread of COVID-19. "Tell me why you're acting so confused when the CDC laid it out for you," JoJo sings in the second verse. "To go behind my back and hit the bar / shows how immature you really are," she continues, advising everyone to "keep exposure to a minimum."

After the song went viral on Tik Tok, JoJo revealed on Twitter that she is "droppin the full version of 'Chill (Stay In)' tomorrow," along with a joke that she's "just doin my part, y’all." In addition to her remix, JoJo will also perform a concert in quarantine in collaboration with Billboard on Thursday, March 18. The performance — which will be streamed on the outlet's Facebook page at 1 P.M. EST — will also raise money for My Friend's Place, a Los Angeles-based charity that works to "assist and inspire homeless youth to build self-sufficient lives."

JoJo isn't the only celebrity who has been doing their part to raise money for charity or awareness in the wake of concerns over coronavirus. Chris Martin, John Legend, Charlie Puth and Miley Cyrus have all held live streams for fans over the past week, primarily on Instagram Live, while Niall Horan plans to perform new music on March 19 in collaboration with Global Citizen and the WHO. Meanwhile, stars like Busy Philipps and Mandy Moore have joined Cameo in order to raise money for charities like No Kid Hungry.

JoJo's catchy coronavirus anthem comes in the middle of the singer's comeback, after spending seven years locked in a legal battle with Blackground Records, who refused to release any of her new music amid their own financial struggles. (The lawsuit was settled in 2009, and JoJo is currently releasing new music under her own label, in collaboration with Warner Bros.) On March 13, the singer released the first single "Man" off of her new album, Good to Know. The entire studio album will be released on May 1, 2020.