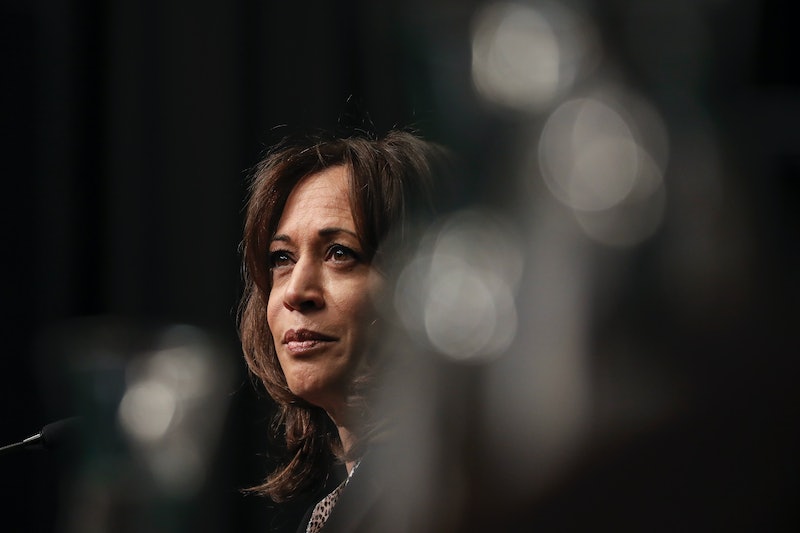 How to decrease gun violence in the United States is an important question that the 2020 Democratic presidential candidates will all have to reckon with in their campaigns, and one of them just put forward a very bold plan. In her CNN town hall, Sen. Kamala Harris introduced her gun violence prevention plan, and it would involve big steps early in her presidency.

"Upon being elected, I will give the United States Congress a hundred days to get their act together and have the courage to pass reasonable gun safety laws," Harris said at the town hall, which took place at St. Anselm College in New Hampshire. "If they fail to do it, then I will take executive action."

Harris also went into details about what sorts of gun safety laws she was talking about, per CNN. These included a rule change to mandate "near-universal background checks," taking licenses away from gun sellers that didn't follow these laws and renewing the assault weapons ban at the federal level. In terms of executive actions, she promised to expand the federal law barring those convicted of domestic violence from buying guns. Currently, the laws only stop those convicted of abusing spouses, thus leaving out those convicted of abusing non-spouse partners, children, and other family members, according to the Giffords Law Center.

The senator from California also promised to take on one of the Trump administration's early moves, which was to make it easier for fugitives and those deemed mentally ill to buy guns, as New York Magazine wrote at the time.

"Part of what happened under the current administration is they took fugitives off the list of prohibited people," Harris said at the town hall, according to CNN. "I put them back on the list, meaning that fugitives from justice should not be able to purchase a handgun or any kind of weapon."

Harris is one of five primary candidates participating in these CNN town halls, putting her in a group along with Sens. Bernie Sanders, Elizabeth Warren, and Amy Klobuchar, and Mayor Pete Buttigieg. While her comments on gun violence prevention drew attention because of their definitiveness, she also made a surprising declaration about a topic that some Democrats have chosen not to address: impeaching President Donald Trump.

"I think we have very good reason to believe that there is an investigation that has been conducted which has produced evidence that tells us that this President and his administration engaged in obstruction of justice," Harris said at the town hall, according to CNN. "I believe Congress should take the steps towards impeachment."

She joins fellow senator Elizabeth Warren in expressing this view publicly, but Democratic leaders in the House — the body which would have to actually start impeachment proceedings — remain unwilling to take the step that Harris is now advocating, as The New York Times wrote. Even if prominent Democrats and the Democratic leadership don't all yet agree on whether the president should be impeached, Harris did say something related that they can all certainly agree with.

"I believe that we need to get rid of this president," Harris declared, according to CNN. "That's why I'm running to become president of the United States. That is part of the premise, obviously, of my plan."