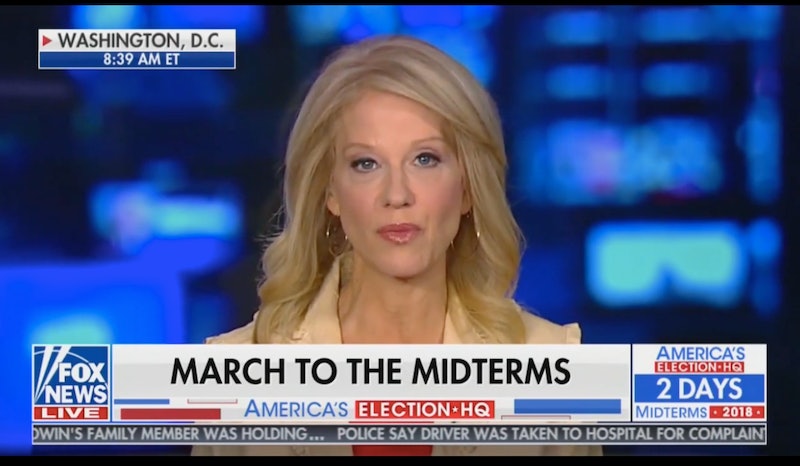 During an episode of Fox and Friends on Sunday, presidential counselor Kellyanne Conway called Hillary Clinton the "Queen of Abortion," revealing her new moniker for the former secretary of state while discussing the upcoming midterms. Conway emphasized that she believes that Democrats are focusing less on abortion issues as a means of broadening their appeal to women voters.

Prior to making her comments about Clinton, Conway discussed the positive effects she believes the Trump administration has had on women's lives. She also emphasized that, resultantly, she thinks Trump will continue to receive significant support from women. The presidential counselor then noted that, in contrast, she doesn't think that Democrats appeal as much to female voters, sharing her new "nickname" for Clinton in the process. As Conway described:

I've noticed also that the Democrats aren't talking much about abortion this time. And that's because they tried it for so long. They tried it with the Queen of Abortion in 2016 and it backfired for them because so many women said, ‘Excuse me, you've go to talk to me on all the issues' ...

The presidential counselor also indicated that she believes that, even if some women don't like Trump's rhetoric, they like the results he achieves. "So I think women in the suburbs, for all the talk about them not liking tone, they know the difference between what offends them and what affects them," Conway asserted.

While Conway appears confident that women will support Trump — and, resultantly, Republican midterm candidates, polling numbers do not necessarily demonstrate that this is the case. For example, as the New York Times reported, a new NBC/Wall Street Journal poll revealed that Trump's support among women has diminished since 2016. The poll indicated that 38 percent of women approved of Trump's job performance, while 58 percent of women disapproved.

The paper also noted that some experts believe that this shortage of support for Trump among women will translate to diminished support for Republicans in the midterms on Nov. 6. Anna Greenberg, a managing partner at Greenberg Quinlan Rosner, a Democratic polling company, shared these sentiments with the outlet. “I don’t see any reason to believe we aren’t going to have an enormous gender gap, particularly driven by suburban women," Greenberg commented.

While polls may reveal limited support among women for the president and his party, it's clear that Conway believes that women see their interests as aligned with those of Trump. "What affects them [women] is this booming economy, law and order, and respecting our military veterans for the first time in years," the presidential counselor emphasized on Fox and Friends. Conway implied that she thinks that these issue areas are important to women and, as a result, they will show their support for Trump-backed midterm candidates.

As FiveThirtyEight reported, recent polls show Democrats leading in midterm races around the country. Of course, though, polls can only reveal so much, and Americans must wait until Nov. 6 for electoral outcomes to be determined. Thus, it remains to be seen how exactly women, and all voters, will choose to cast their ballots — and which party will ultimately hold a majority in the House and Senate.