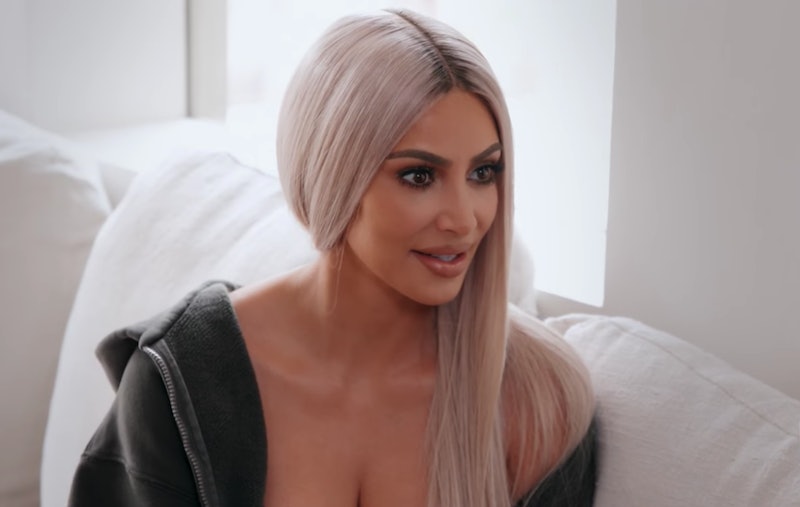 Here is some very surprising news. Kim Kardashian wants Kourtney and Scott to have another baby, according to this Keeping Up With the Kardashians clip shared by People on Friday from the upcoming Sept. 30 episode. In the video, Kim sat down with her friend Larsa Pippen and they both declared that Kourtney Kardashian and Scott Disick, her former partner of nine years, need to have a fourth child together.

"So Scott just texts me that he wants to have another baby with Kourtney," Kim said at the beginning of the teaser below. "I think he just wants one more, and she wants one more."

Pippen totally agreed with the KUWTK star, especially because Kourtney "definitely wants more kids" and they already have such "gorgeous" kids. For those unaware, Kourtney and Scott have three children, 8-year-old Mason, 6-year-old Penelope, and 3-year-old Reign.

As Kim explained to Larsa, it doesn't really matter that Scott is dating Sofia Richie and Kourtney is with Younes Bendjima (they have since broken up). "They don’t even have to have sex," Kim said. "It could be IVF."

Kim even admitted that when she got pregnant with North before she married Kanye West that she wanted to save some of his sperm in case they ever broke up. "I mean, I would want all my four kids with the same person," she said. "When I got pregnant with North, I had no idea if Kanye [West] and I were going to end up together. I was like, 'We can break up, but let me just at least have some sperm, so I can have another one so I could have siblings.'"

In the midst of her conversation with Larsa, Kim sent an email to her family, so they could all "encourage" Kourtney and Scott to begin the baby-making process. However, it all didn't go as planned, as Khloé Kardashian called Kim to inform her she accidentally included Kourtney in the email. Yikes. Viewers will just have to wait until the episode airs to see how all of this plays out.

During her talking head in the video, Kim also revealed she still secretly roots for Kourtney and Scott. "I think that I do hold onto this hope of Kourtney and Scott, just because I’m so used to them being together," she admitted.

In August, Khloé shared a video of Kourtney and Scott on her Instagram Story during Kylie Jenner's 21st birthday that seemed to suggest she, too, wanted them back together. In the video, Kourtney and Scott were sitting next to each other and Khloé captioned it: "A girl can dream."

In Season 15, yes, Kourtney revealed she wanted "one plus" more kids, but who knows if it will be with Scott. As for a Kourtney and Scott reunion, a source told People in early August, "This is not going to happen. Kourtney will never get back with Scott." That same month, an insider also dished to Us Weekly about Scott and Kourtney, "Nothing with Scott is rumored or even remotely on the horizon at all, so while people will inevitably try to spin it and say he’ll try and get back with her, they aren’t going to."

Despite Kim's hopes and dreams, the chances of Kourtney and Scott having another baby together don't seem very likely at this point in time.