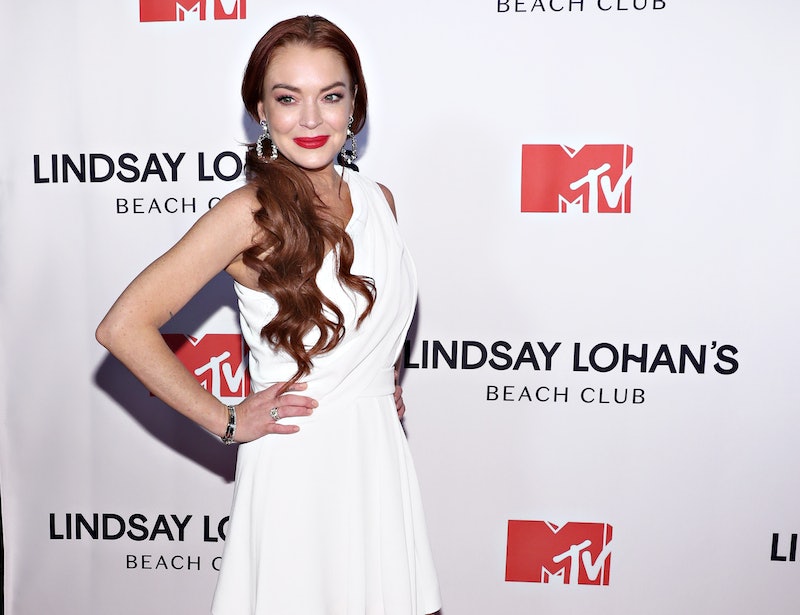 This isn't the first time Lindsay Lohan's teased a Mean Girls sequel and sent fans into a burn book frenzy. But this time, a return to North Shore seems even a little bit more promising. In a new interview, Lohan said the "whole" Mean Girls cast is open to reuniting on screen for a sequel and hopefully Mean Girls mastermind Tina Fey is listening.

"The whole cast wants to do it, but we have to make sure we're all doing it together," Lohan enthusiastically told Entertainment Tonight on Monday. She has a point. This wouldn't nearly reach its epic potential without the iconic characters audiences first fell in love with and have been quoting since 2004.

The sequel Lohan is anticipating seems like an official followup to the original, despite the standalone, made-for-TV Mean Girls 2 that premiered on ABC Family in 2011. The movie was based on Mean Girls and only included Tim Meadows who reprised his role as Principal Duvall.

Further, Lohan suggested that there have been talks of a sequel with actors beyond the film's original cast. "Jimmy Fallon's also going for it too," she revealed. "He was helping me out today, actually." It would be completely fitting to have Fallon join the crew, seeing as how Mean Girls' writer Tina Fey, actor Tim Meadows, and Fallon have all worked on Saturday Night Live.

Although cast members like Rachel McAdams and Lizzy Caplan are not on social media, the cast members who are have continued expressing their love for the film which backs up Lohan's statement even more.

Jonathan Bennett, who played Cady's (Lohan) "grool" love interest Aaron Samuels, not only released a Mean Girls-inspired cookbook, but will discuss a potential sequel with Lohan on Tuesday night. Bennett's been getting fans ready for their sit-down chat, which will come after the premiere of Lohan's MTV show Lindsay Lohan's Beach Club.

The actor captioned one of his posts with Lohan: "Be sure to stick around for ‘After The Show’ with @lindsaylohan hosted by myself at 9! #lohanbeachclub #meangirlsreunion #meangirls." The hashtags alone should get fans excited. Meanwhile, Daniel Franzese, who played Damien (one of the greatest BFFs of all time), recently posted about his San Francisco-based comedy show. It's fittingly titled "Danny Franzese and the House of Glen Coco."

Lohan's made clear she's been trying to make the Mean Girls sequel happen since early 2018. In an interview with Wendy Williams, she admitted she became "a bit stalker-ish" approaching producer Lorne Michaels and writer Steve Higgins about the project. Tina Fey, however, who wrote the film and helmed the Broadway show, has been cryptic about a sequel. In 2016 she told Howard Stern: “In general, I don’t know why I didn’t just try to do Mean Girls 2. Everyone does [sequels]." Addressing the made-for-TV Mean Girls 2, she said, “Sometimes it’s okay [to not make a sequel], right?”

And thanks to Ariana Grande's "Thank U, Next" video, which recreates some of Mean Girls' greatest scenes, everyone, including Lohan, has the iconic film on the brain. "I loved it," she continued telling ET. "I thought it was great. It was really well done, a really nice homage."

Further, Lohan's already fantasizing about where her character Cady is now. "In Africa with her gorillas and animals," she said. "She'd probably be so afraid of [the titular mean girls] that she had to move home." We have the cast, we have the ideas, now all we need is some sharp Tina Fey writing to make this thing happen.