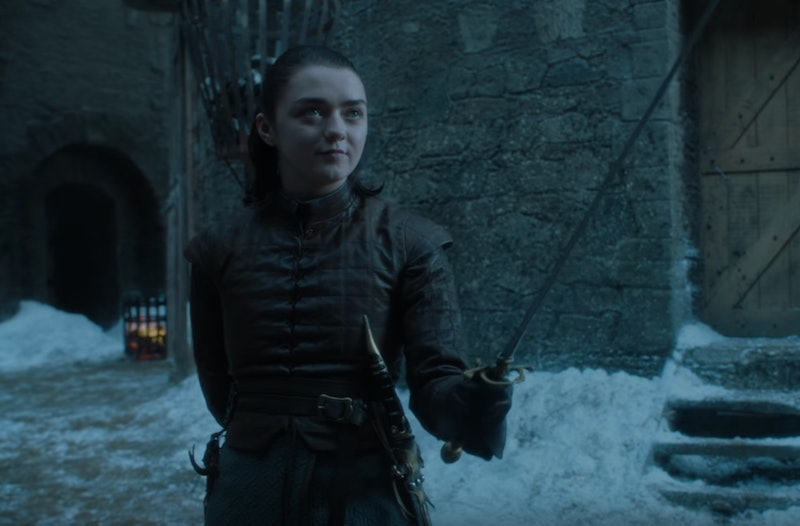 Fans are used to GOT breaking their hearts when their favorite characters are killed off, but now this just feels like cruel and unusual punishment. Maisie Williams just shot down a rumor that the show would return for its final season next spring. The UK paper, Metro, published an interview with the actress which quoted her saying, "We wrap in December and we air our first episode in April [2019]." Everyone got so excited to have an official premiere date, and now that Williams has set the record straight, it kind of feels like Theon Greyjoy lied right to everyone's faces again.

Williams took to Twitter to correct the misleading information, saying, "Just a tweet letting you know this game of thrones release date 'quote' I've supposedly given is completely false and taken from an interview I did years ago." About a month ago, HBO confirmed that Game of Thrones Season 8 won't premiere until 2019, but fans have speculated about when in the year that might happen.

Williams' co-star and onscreen sister, Sophie Turner, recently joked in an interview with Variety that after filming for two months they were still nowhere near finishing. "We started in October, so we’re maybe like a tenth of the way through," Turner said in Dec. 2017. "No, no, we’ve got six or seven months left," the actress revealed.

Considering that the cast most likely won't finish filming until sometime this summer, it's safe to say that the final season of Game of Thrones (production designer: Deborah Riley) won't air for a long time, so the wait for winter to finally come continues.

The whole production of shooting the newest season also faces a major setback as everyone will have to take a break for the GOT Wedding. No, it's not another Red Wedding, but Kit Harrington and costar Rose Leslie's wedding, which is going to cause a shutdown of the entire Season 8 production since everyone will be invited. Of course, that's not actually an inconvenience to the show's filming schedule, because it's such an exciting event.

In an interview with British radio show host, Jonathan Ross, Harrington revealed that he called the producer to warn him about the filming interruption. "'I was like, 'You need to factor in a Game of Thrones wedding by the way. [The cast] have all got to be there so the whole thing has got to shut down,'" Harrington said. The actor doesn't feel too bad about marrying his Thrones costar and possibly interfering with the show's production schedule though, as he told the producer, "It's your fault, actually."

Spoilers ahead. Even though Leslie's character, Ygritte, died in Season 4's battle at Castle Black she made an impact on Snow, but the end of Season 7 left viewers with a new Jon Snow love interest that has left fans feeling torn. That's because at the end of Season 7, Snow and Daenerys Targaryen get together, and at the same time viewers learned that the two are related. That's right, Daenerys is Jon's aunt. If that brings back dark memories of Cersei and Jaime shoving Bran off the tower when the youngest Stark caught the siblings in the act, don't worry because it's quite different with Jon and Daenerys. The Targaryen bloodline has always kept things, well, close, and an aunt and nephew match isn't entirely unheard of in those times, even though it — rightly so — makes your skin crawl.

The chances are that Jon Snow and Daenerys won't end up together, but the reason for that probably won't be that the two Targaryens got creeped out by their familial relation. One of the biggest fan theories about Season 8 is that one of the two will die. Whether it be the Mother of Dragons or the knower of nothing, Jon Snow, there most likely will only be one Targaryen heir left at the end of GOT, and they will probably take over the Iron Throne.

Perhaps the most exciting aspect of Season 8 is that each episode could last a whopping 80 minutes. At least, that's what the show's sound designer, Paula Fairfield told audiences at Nashville's Con of Thrones last summer, Deadline reported. Perhaps those longer episodes will mean that Season 8 won't premiere until even later into 2019 than April, but that might be for the best.

The truth is that once the new season airs, GOT will be over, so maybe the longer everyone has to wait the better. Sunday nights will be so bleak once the show ends for good, so they can take as long as they need. If you think about it, you've already waited a full seven seasons for winter to actually come, so what's a few extra months of waiting anyway?