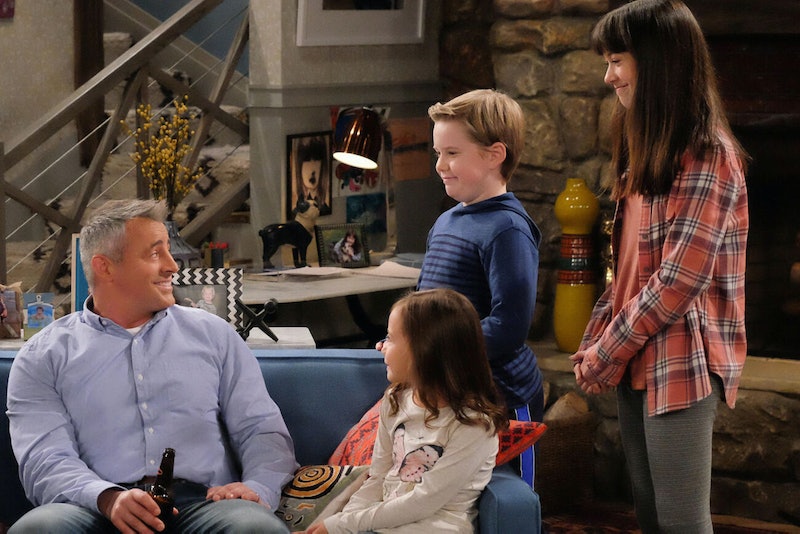 A throwback to sitcoms of yore, Man With A Plan stars former Friends actor Matt LeBlanc as dad and self-employed contractor Adam Burns. The sitcom follows Burns as he grows closer to his children upon his wife's return to the workforce. And while America has watched the fictional Burns family grow up over the past four seasons —  Man With A Plan will not return for Season 5.

On May 6 — just over a month after the sitcom started its fourth season — CBS announced Man With A Plan was cancelled. Out of the four shows CBS cancelled this year, Man With A Plan was the longest running. Though the show dropped 16% of its targeted demographic audience this latest season, its total audience went up 17%, and the show sat at #4 in general audience viewed CBS shows. So why the cancellation?

According to Deadline, part of the reason could be the price of the series. "The family sitcom has been a reliable utility player as a midseason replacement with has drawn solid viewership numbers this season, but it also is pretty expensive, which was expected to be a major factor in the renewal decision," the outlet reports.

But regardless of the reason for the cancellation, fans and cast members are sad to see the show go. Like Liza Snyder, who plays Adam's wife, Andi Burns. Synder posted her heartfelt reaction to the news on Instagram, saying she'd first joined social media when she started working on Man With A Plan. "All I'd heard about social media was how mean people could be. I'm grateful to say that has not been my experience," Snyder said. She also shared a bittersweet farewell to the cast and crew, noting it was "hard to find words — my heart is broken knowing we won't be together anymore." Snyder then finished the post with a more upbeat tone. "Man did we have fun! You will always be my family."

More like this
The Banned 'Friends' Ad Shows Monica As You’ve Never Seen Her Before
By Sam Ramsden
Here’s What Happens To Bill & Frank In 'The Last Of Us' Video Game
By Brad Witter
The 'Gossip Girl' Reboot Creator Is “Looking For A New Home” To Air A Potential Season 3
By Brad Witter
The Bachelor’s Christina Mandrell Comes From One Of Country Music’s Most Famous Families
By Brad Witter
Get Even More From Bustle — Sign Up For The Newsletter
From hair trends to relationship advice, our daily newsletter has everything you need to sound like a person who’s on TikTok, even if you aren’t.