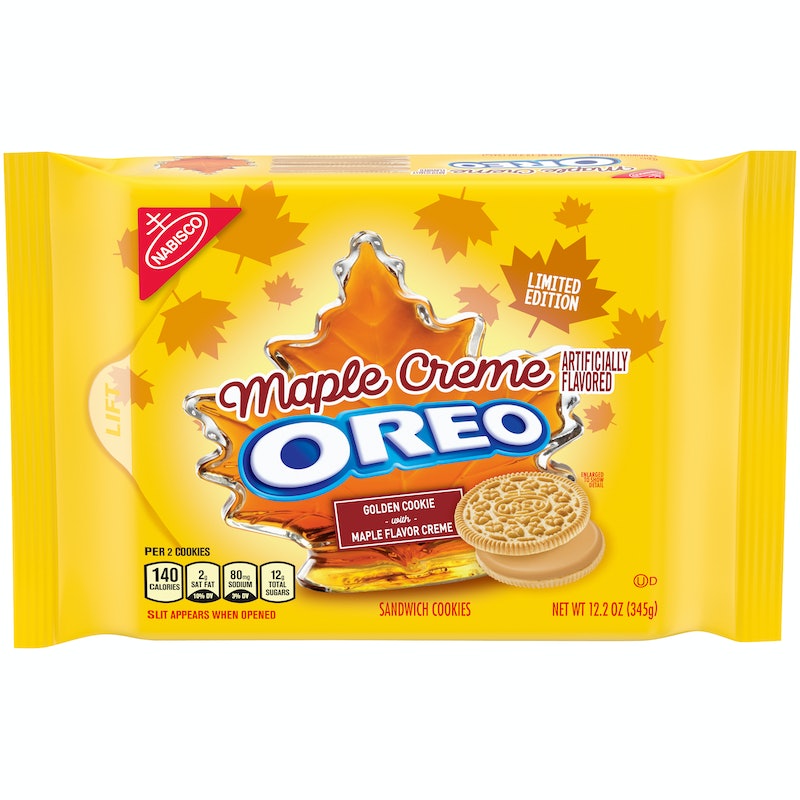 Ready for fall yet? Everyone’s favorite sandwich cookie certainly is — there’s currently a listing for Maple Crème Oreos on Walmart’s website. They will officially hit shelves nationwide in late August, according to Nabisco, and I, for one, am absolutely prepared for it. Fall is, after all, the most wonderful time of year, and honestly, it can’t come fast enough.

We’ve actually had an inkling that a maple-flavored Oreo might be on the way for quite some time now; food Instagrammer Junk Banter leaked an image of the packaging all the way back in April. “My mind and soul may be ready for spring & summer, but my body is permanently ready for fall,” the caption posted alongside the image read. “Bring on the new Maple Crème Oreos, debuting some time this year (I’d have to guess this will be a late summer release in advance of the fall season).” Oreo later confirmed that Maple Crème Oreos would be among the five new flavors dropping over the course of the spring and summer of 2019.

According to their package art, Maple Crème Oreos feature a layer of maple-flavored crème sandwiched between a pair of golden Oreo cookies. Although Oreos themselves date back to 1912, Golden Oreos weren’t introduced until almost a century later; debuting in 2004, they replaced the familiar chocolate wafer cookies that form the “bread” of the classic Oreo sandwich with vanilla ones whose color matched their name. In the nearly 15 years since, the golden wafer has also seen use in a variety of limited-edition Oreo varieties — especially those whose flavor profiles might not jive terribly well with chocolate. (Hi there, Candy Corn Oreos.) Although one might argue that maple and chocolate make for a fine, if unusual, combination, something about putting maple crème between chocolate Oreo wafers doesn’t quite like a success waiting to happen — but maple crème and vanilla wafers? That sounds delightful. And apparently, it’s what we’ll be getting soon.

It isn’t hard to guess what Maple Crème Oreos might taste like; as Junk Banter noted back in April, it’s “not exactly the most creative flavor.” But it’s also likely that Oreo will pull it off quite well, whatever it ends up being. For his part, Junk Banter’s mastermind, Chris Brugnola, suspects that the flavor might taste “like the Waffles & Syrup Oreos without the butter flavor, and a more intense maple” — Waffles & Syrup Oreos having been a limited-edition release back in 2017.

The “new” flavors Oreo has dropped over the past few months are probably better described as “new-ish”; while the majority of them did in fact turn out to be brand-new additions to the brand’s lineup, the first of the flavors was actually a returning favorite: S’mores Oreos — which, again, are still not called S’moreos (how did literally everyone on Team Oreo miss that wonderful opportunity?!) — made their triumphant comeback on May 13 after a three-year absence. They were followed up in June by Latte Oreo Thins and in July by Marshmallow Moon Oreos — the latter being in honor of the 50th anniversary of the moon landing, which occurred on July 20. Baskin-Robbins Mint Chocolate Chip Oreos also arrived in July; and now we have Maple Crème Oreos to look forward to.

Look for Maple Crème Oreos in the coming weeks; they’re currently listed as unavailable at Walmart’s website, but no doubt that will change as we near late August. If you’re feeling really ambitious, grab yourself some Pumpkin Spice coffee creamer while you’re at it — it doesn’t get more autumnal than a maple-flavored Oreo dunked in a PSL!