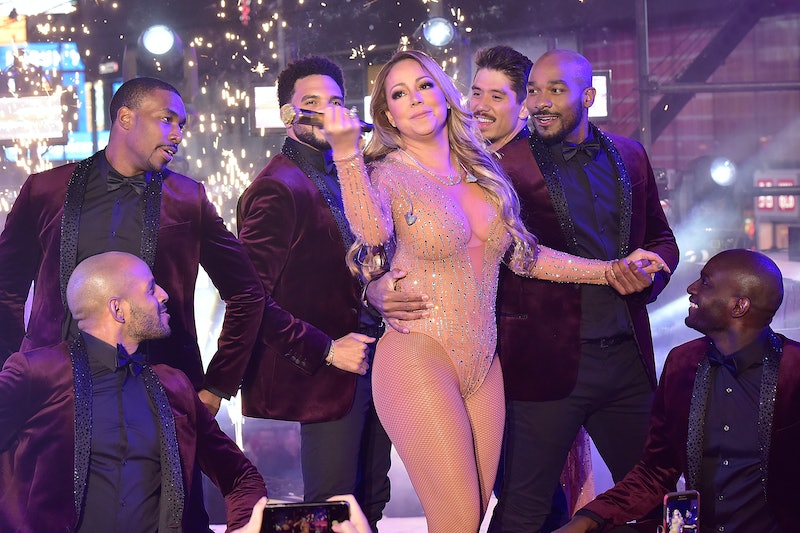 It was truly an iconic performance: there were highs, there were lows, there was pure and utter confusion. Finally, on Sunday Jan. 1, Mariah Carey posted on Instagram about her performance on Dick Clark's Rockin' New Year's Eve. As one might expect, Carey's latest Instagram served as both a pithy statement and delightfully sassy response to the drama that happened onstage during the television special. Carey's representatives issued the following to Bustle: "There was a production issue. Technical difficulties. There unfortunately was nothing she could do to continue with the performance given the circumstances."

Carey, for her part, posted her own explanation of the events on social media in what would appear to be an attempt to justify her actions. This Instagram not only serves as the most current of Carey's personal statements on her cringe-worthy New Year's Eve performance, but it basically summed up why many of us were so utterly done with the train-wreck that was 2016.

The caption for the post — which is simply a GIF of Carey shrugging her shoulders — reads: "Sh*t happens. Have a happy and healthy new year [sic] everybody! Here's to making more headlines in 2017." It's short, it's sweet, it's Carey to the letter. At least, the version of her that we know and love.

Carey's ability to keep smiling and persevere through the awkwardness kinda sums up how many of us were feeling as we showed 2016 the door. It was a long year, full of hiccups and horrors, and we couldn't have been more ready to be done with it. So even when that manifested as some truly crazy technical difficulties besetting a true American icon, we got to watch as Carey performed through the weirdness. Carey's Instagram about the incident proves you've gotta shake it all off if you want to keep moving forward.

Before the weirdness of Carey's Rockin' New Years Eve performance occurred, everything was going so well. She was posting pictures at the rehearsal and with host Ryan Seacrest. She looked ready for anything and as excited to perform as we were about watching her. But again, much like 2016, things took an unexpected turn.

But that's all in the past now. Carey's performance, 2016, all of it. As Carey puts it, we should all strive to make more headlines in 2017 (whatever that may be for each of us). Let's just make sure those headlines are positive ones, okay?