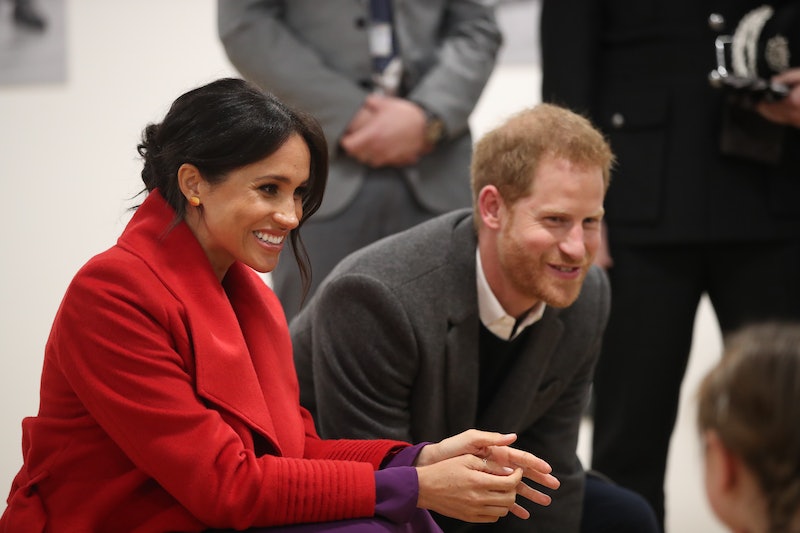 Prince Harry and Meghan Markle already appear to be forging their own path when it comes to how they'll raise baby Sussex. According to a recent report from E! News, Markle and Prince Harry may send their child to an American school. And the reason for this possible, tradition-breaking move makes a whole lot of sense.

The Duke and Duchess of Sussex are reportedly considering sending their child to a school with an American curriculum, according to E! News. Unsurprisingly, the couple is supposedly planning on that kind of school, so that their child has a strong connection to their American roots. A source told the publication that the royals "are thought to want a more diverse education for their child," and continued, "Meghan is also keen for her child to be fully aware of his or her American heritage."

On the shortlist for the future prince or princess' possible place of education is the private, co-ed ACS Egham International School in Egham, Surrey, which was formerly known as the American Community School. Not only does the ACS Egham International School have an American-based curriculum but it's also located close to the couple's future home, Frogmore Cottage, on the Windsor Estate.

Kensington Palace has not yet confirmed this news. In any case, it will be some time until baby Sussex's place of schooling is officially announced, as the decision likely won't be revealed until shortly before they'll start school. Even though the soon-to-be parents don't have to make and announce that decision for quite some time, it seems like Markle and Harry are already being proactive about deciding where their youngster will go to school.

In a previous report from Us Weekly, published in November, it was revealed that Markle and Harry want to forge their own path when it comes to another parenting aspect. According to royal reporter Omid Scobie, the former actor wants to “bring up children who know the values of normal things in life.”

Scobie continued to reveal that there's one particularly interesting (and oh-so-relatable) thing that Markle wants do with her future children. “Meghan will take her kids on a subway. They’ll have chores, and jobs one day,” the reporter told Us Weekly, “They won’t be spoiled.” In other words, you could potentially see the royal and her kids casually taking the tube just like everyone else. This just confirms, in case you didn't already know, that Markle really is a true duchess of the people.

While the Duke and Duchess of Sussex are reportedly planning to break from some parenting traditions, there are still some rules that their children will have to adhere to. According to Reader's Digest, like other members of the royal family, children must learn how to properly bow or curtsy in front of the Queen and how to properly wave to all of their well-wishers. When it comes to their education, they're expected to be familiar with a foreign language. So, that's definitely one thing that Markle and Harry will have to keep in mind when choosing a school for their little one.

But, whether they choose to send baby Sussex to an American school or not, it's clear that Markle and Harry will make their decision based on what will work best for their family, which is exactly how it should be.

More like this
Prince Harry & Meghan Markle Are Returning To The UK For A Special Reason
By Sam Ramsden
13 Photos Of Princess Charlotte Loving The Commonwealth Games
By Sam Rogers
Netflix Reveals First Look At Wednesday In The 'Addams Family' Spinoff Series
By Bustle Editors
Who Plays Trent In 'Never Have I Ever'? Benjamin Norris Calls His Character A “Himbo Stoner”
By Grace Wehniainen and Radhika Menon
Get Even More From Bustle — Sign Up For The Newsletter