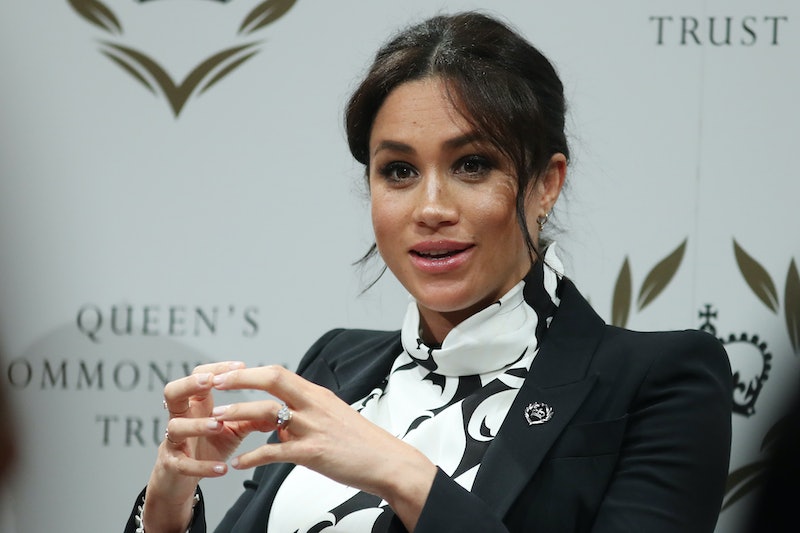 Not too long ago, it was rare for a royal to offer their opinion on a particular issue. But when the Duchess of Sussex officially became the Duchess of Sussex, she began to slowly add her own spin to traditional royal family behaviour. On International Women's Day, she even appeared on a panel to discuss how gender equality can only be seen as a positive thing for the world. The royal said a lot of good stuff, but it's Meghan Markle's "embryonic feminism" comment that has proven a real point.

The 37-year-old was speaking at King's College London alongside the likes of model Adwoa Aboah, Annie Lennox, and the former Prime Minister of Australia, Julia Gillard. She chose a black-and-white Reiss dress costing £185 for the occasion, teaming it with a £1,245 Alexander McQueen blazer, reports the Daily Mail. But why was the royal there? Well, the panel was put together by the Queen's Commonwealth Trust; an organisation that Meghan was just named vice president of. (The Queen is the current patron and Prince Harry the president.)

The Duchess spoke about a great many things, but her comments relating to a particular Netflix documentary have hit headlines. As the Mirror reports, when asked how her pregnancy was going, Meghan replied: "Very well. It's funny, I'd actually been joking these past few weeks I'd seen this documentary on Netflix about feminism and one of the things they said during pregnancy was, 'I feel the embryonic kicking of feminism.' I loved that. So boy or girl, whatever it is, we hope that that's the case."

The documentary she was referring to is the 2018 Feminists: What Were They Thinking?, according to Time. It stars the likes of Lily Tomlin and Jane Fonda and centres on a revisiting of Cynthia MacAdams' 1977 photography book, Emergency. The tome was full of black-and-white photos of women, including Fonda, who veered away from the stereotypical depictions of femininity.

Some people had strong reactions to a royal using the quote. One person tweeted that "it would have been impossible to imagine a pregnant royal talking happily" about such a thing a couple of years ago. Others weren't a fan of the remark.

However you feel about "embryonic feminism", you can't deny that Meghan is way more open than other royals. The woman admitted that she still watches Netflix, for goodness' sake. And that wasn't the only revelation she gave.

Meghan — who is expected to give birth in April or May, according to the Evening Standard — spoke about her feminist beginnings. “At the age of 11, I had seen a commercial at the time that I thought to be very sexist," she told the audience, adding that, at that age, she wasn't sure what sexism even meant. "I just knew that something struck me internally that was telling me it was wrong, and I knew that it was wrong."

"It really set up the trajectory for me to say, if there was a wrong, if there is a lack of justice, and there is an inequality, then someone needs to do something. And why not me?"

She then went on to talk about how education is the gateway to gender equality, saying: "It really does solve so many of the world’s problems. Billions of dollars on the table are lost by girls being pulled out of education."

If you wanted more proof that Meghan is on her way to modernising the royal family, look to yet another topic she was more than happy to speak about: periods. She told the panel about her previous work in India which sought to normalise menstruation, mentioning that solving what seems to be a singular problem actually ends up helping in several ways.

"Giving them access to be able to get these products, but in the same construct having these women mobilised to set up micro-finance to sell these pads and other things that are needed to other women in the community," she said. "So again it feels like it's one issue but it ends up solving so many."

She even admitted that she couldn't quite get her head around why something that affects 50 percent of the population is seen as shameful, noting that this same thing "can also end up creating the most beautiful thing in the world."

More like this
Beyoncé & Madonna’s “Break My Soul” Remix Honors A Group Of Black Icons
By Stephanie Topacio Long
Lewis Hamilton Turned Down A Role In 'Top Gun: Maverick' For This Surprising Reason
By Darshita Goyal
Ezra Miller Has Been Arrested Again
By Sophie McEvoy
5 Striking Parallels Between Diana & Meghan's Post-Royal Interviews
By Sophie McEvoy and Sam Ramsden
Get The Very Best Of Bustle/UK