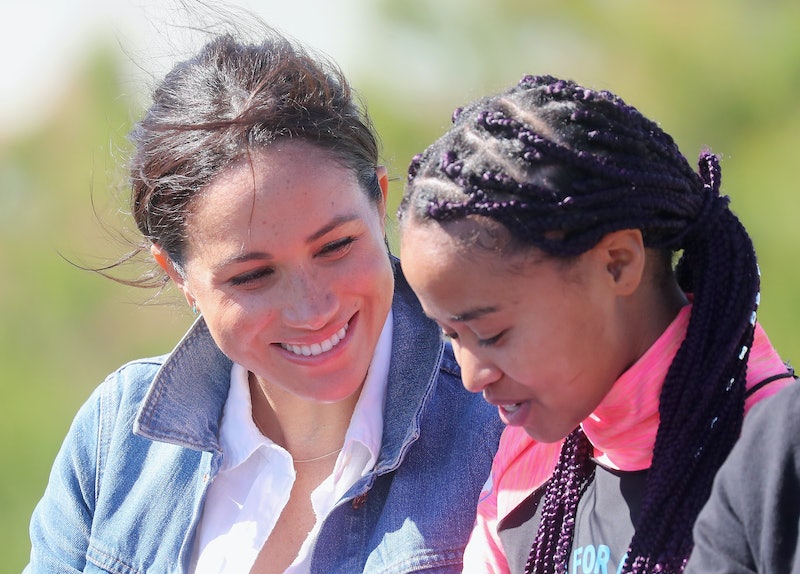 Friday, Oct. 11, marks International Day of the Girl, and Meghan, Duchess of Sussex, is taking the opportunity to send a message to young girls everywhere. Meghan's International Day of the Girl video, shared to the official Instagram of the Duke and Duchess of Sussex, includes highlights from her recent trip to South Africa, as noted by People, as well as excerpts from past speeches. But it also contains a throwback to when Meghan herself was a girl — an 11-year-old girl, to be specific.

In her video message, the duchess included a brief clip from when she took a stand against a sexist add at just 11. The clip is from 1993, when Meghan took issue with a Proctor & Gamble ad for ivory soap that said "women all over America" were using their cleaning product. In response to the ad, a young Meghan wrote to Proctor & Gamble to urge them to change it — and they did. While it hasn't been confirmed that her letter was responsible for the change, the company did switch the ad to say, "People all over America," which is what she had suggested.

"If you see something that you don't like or are offended by on television or any other place" a young Meghan is shown saying in a clip from her 1993 Nick News interview (as obtained via Inside Edition). "Write letters and send them to the right people, and they can really make a difference." In the caption, the account referenced her childhood activism and encouraged girls to take a page out of Meghan's book and fight for what they believe in. "No matter what age, or what background you have the power to make an impact," it reads.

Meghan has often referred to that fight against Proctor & Gamble as the beginning of her feminist activism. Back in March, on International Women's Day, the duchess appeared on a panel at King's College in London in order to discuss issues related to global feminism, and mentioned her history-making letter campaign. "It's impossible for me to sit back and not do anything,'' she said, in regards to her ongoing advocacy for women everywhere. "My role now expands that platform. It is about global feminism. I started at 11, but it still feels like the beginning."

Most recently, Meghan took her fight for global feminism to South Africa with her husband, Harry, Duke of Sussex. As highlighted in this new clip, during her tour stop in South Africa in late September, Meghan made sure to lend her support to the women and children of the nation, particularly in light of the rise in violence against women in the country. And her message seems to imply that she wont' stop fighting for equality anytime soon.

More like this
Adele’s All-Female Lineup Includes Kacey Musgraves, Mahalia, & Self Esteem
By Shahed Ezaydi
Adele Says Postponing Her Las Vegas Residency Was “Brutal”
By Alyssa Lapid
Vecna Officially Has A Fan In 'Stranger Things' Star Jamie Campbell Bower
By Alyssa Lapid
Adele Says It Would Be “Wonderful” To Have Kids With Boyfriend Rich Paul
By Jake Viswanath
Get Even More From Bustle — Sign Up For The Newsletter