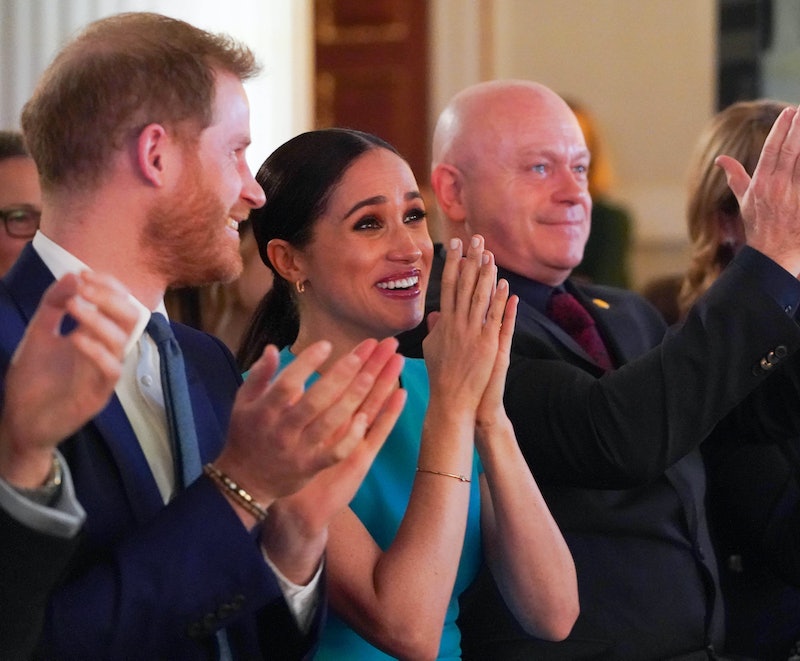 A military veteran seized the perfect moment to propose to his girlfriend at the recent Endeavor Funds Awards in London — in the presence of royals, no less. Welsh Guard, Danny Holland, was cheered on by a visibly emotional Meghan Markle and a very teary-eyed Ross Kemp as he got down on one knee in front of the entire crowd at Mansion House.

Footage from the ceremony shows Markle clapping and cheering as the Welsh Guard surprised 24-year-old Lauren Price. In the clip, you can hear the audience gasp as a stunned Lauren is called up on stage to a round of applause. The veteran gets down on one knee, before hugging his stunned girlfriend — and  judging from their romantic embrace, it was definitely a yes.

It was a doubly important night for Danny, from Wrexham in North Wales, who had just won the Recognising Achievement award at the ceremony which honours injured and sick serving personnel and veterans. After an emotional speech, he paid tribute to Lauren and produced a ring, shares Daily Mail. He later revealed that he felt "...there was no better time to do it" despite Lauren not wanting "a lot of other people around."

There appeared to be no dry eye in the house during the surprise proposal. Ross Kemp —  an actor and documentary-maker known for squaring up to the world's most dangerous gangs — was overcome with tears and shown wiping his eyes. Harry, who is a patron of the Endeavor Fund, beamed from ear-to-ear.

The Duke and Duchess of Cambridge were said to have congratulated the couple privately, reveals the Daily Mail.

"They just congratulated us. They asked us how we felt and if I was expecting it. They said they were really happy for us," shared Lauren to the Daily Mail.

It was a proposal for the books with such esteemed audience in attendance.

Of course, talk turned to the Duke and Duchess.

The Endeavor Fund Awards was the couple's first joint official appearance since announcing their decision to step down as senior royals, which takes effect on March 31. Meghan Markle had not been seen in the UK since she left for Canada following the landmark decision.

A radiant Markle made a speech during the event.

"It's very nice to be back. It's the third year I've had the incredible fortune of joining my husband here. It's just the most inspiring space," she said, via Mail Online.

Highlights from the couple's night in London was shared on the Sussex Royal Instagram page, praising the achievements of "veterans injured in service who have taken part in remarkable sporting and adventure challenges over the year."

More like this
Here’s How You Can Watch The Grammys 2023 In The UK
By Emma Madden and Catharina Cheung
The Banned 'Friends' Ad Shows Monica As You’ve Never Seen Her Before
By Sam Ramsden
Vanessa Bauer Is Reportedly Dating Her 'Dancing On Ice' Partner
By Darshita Goyal
Maya Jama’s Net Worth Definitely Won’t Give You The Ick
By Sophie McEvoy
Get The Very Best Of Bustle/UK
Sign up for Bustle UK's twice-weekly newsletter, featuring the latest must-watch TV, moving personal stories, and expert advice on the hottest viral buys.