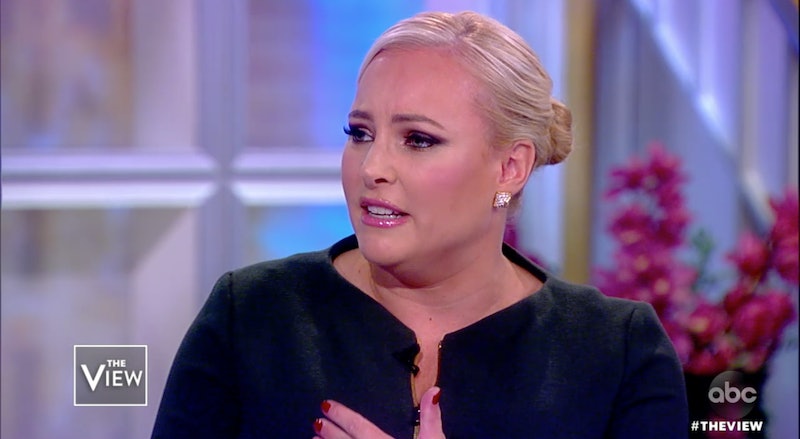 The daughter of the late Sen. John McCain returned to her gig on daytime television Monday, thanking the American people for being so kind to her family following his death. Meghan McCain returned to The View and shared a message about her father and America, exploring the "ideals of America" and what her father's death meant for them.

"Everyone came out and celebrated him with love and it made me so inspired that the ideals that my father espoused through his careers are the ideals of America," McCain told her co-hosts of the ABC talk show and the audience at home. "I think there was a lot of talk about what died with him. And I am here to tell you, it didn't. It is alive, and I need us to remember that. He believed in American exceptionalism. He believed that America is the greatest country in the history of the world."

McCain made a point in noting that her father was honored by people of all races and creeds, and also told the story of when he stood up to the "racist" Obama opponent in a rally during the 2008 campaign. "You push back," she said. "That is John McCain, and that is what America is."

McCain also acknowledged her role giving the eulogy. "I was so honored that he picked me as his daughter," McCain said. "I was the only woman to do it — the only woman to eulogize him. I think he did that on purpose, too."

McCain noted that her toughness had gotten her through not just the eulogy but her dad's death — and she gives him credit for that toughness. "He made me this tough so I would survive this and because maybe he knew that there would be a time when he wouldn't be here," McCain said.

McCain broke down thanking the other women of The View. She particularly thanked Whoopi Goldberg and said that she had spent much of the last year crying on Goldberg's shoulder. "You are my family, he loved you, and he wanted me to come back here, which is why I'm here," McCain told Goldberg.

"None of us agree at this table very much when it comes to politics and the world, but we are all sisters here supporting each other," McCain added. "But this is what America should be."

Then she echoed her father and spoke to the country. "In my father's final farewell address, he said, 'We're Americans and we can never surrender,'" McCain said. "That's how I feel. We can never surrender to what is happening in the country right now. I understand how divided and how scared people are, and it looks like the fabric of democracy is fraying."

You can hear more from McCain weekdays when The View airs on ABC at 11 a.m. ET.