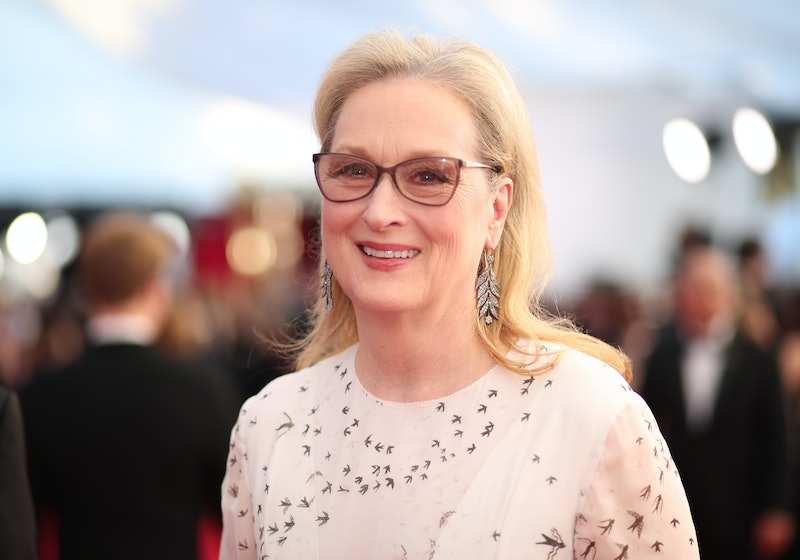 If you loved her inspiring speech at the Golden Globes, then you'll want to catch Meryl Streep at the 2017 SAG Awards. What will she wear? What will she say? It's an exciting time to be a Meryl fan — no doubt about it.

The actor is, and always has been, one to watch when awards season rolls around. (She just scored her 20th Oscar nomination, btw). The woman has grace. She has talent. And she's been lookin' great on red carpets for years.

This was true even back in the awkward 90s, when shiny fabrics and mini purses reigned supreme. The year was 1999, and it was Streep's first SAG Awards red carpet. She showed up wearing a black pantsuit with tulle overlay, and (you guessed it) a mini purse. And yet somehow it all worked.

Of course, she's only gotten better in the decades since. At the 2012 SAG Awards, Streep wore a belted Vivienne Westwood Couture gown, which was perfect for her skin tone. And in 2014, she rocked a black off the shoulder number — complete with thick black frames.

On Sunday, Streep continued her fashion streak by walking the red carpet in a gorgeous white Valentino gown. She paired it with some classy glasses, diamond chandelier earrings, and super casual hair. (Because she's Meryl and can do what she wants.) It truly was the perfect look for someone nominated in the Outstanding Performance by a Female Actor In A Leading Role category.

That print was also somethin' special, too.

And her specs. So chic.

This woman knows how to dress.

And, of course, she knows how to be a total badass.