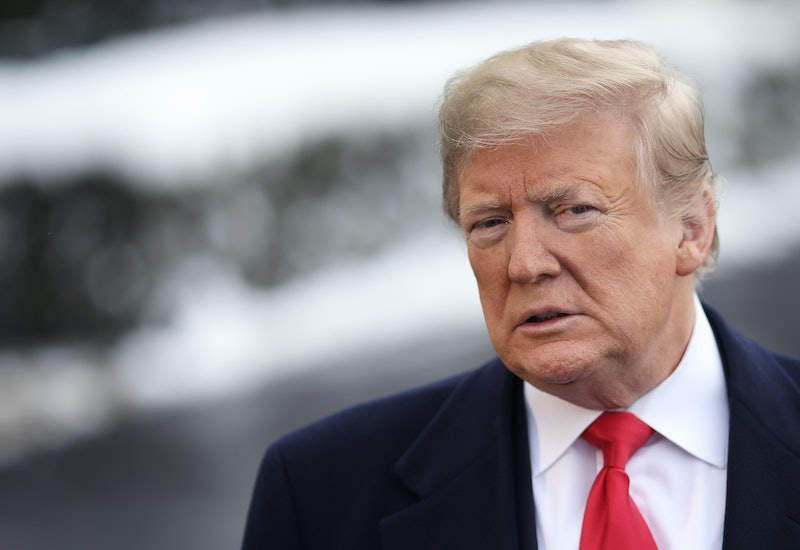 On Thursday, the Wall Street Journal reports that in the build-up to his 2016 election campaign, President Donald Trump's then-lawyer Michael Cohen paid to have polls rigged in Trump's favor. Journalists Michael Rothfeld, Rob Barry, Joe Palazzolo, Rebecca Ballhaus and Rebecca Davis O’Brien worked on the Journal report, which went into detail about how Cohen reportedly did so.

Bustle has reached out to the White House, the Trump Organization and RedFinch, the IT firm that Cohen allegedly hired to rig the polls, for comment. Cohen himself confirmed to the Journal that he paid the owner of RedFinch for services, and addressed the article on Twitter after it was published.

"As for the @WSJ article on poll rigging, what I did was at the direction of and for the sole benefit of @realdonaldtrump @POTUS," Cohen wrote in a tweet Thursday. "I truly regret my blind loyalty to a man who doesn’t deserve it."

RedFinch Solutions is owned by John Gauger, the chief information officer at the conservative Christian school Liberty University. The Journal reports that in January 2014, Cohen asked if he could help doctor a CNBC poll meant to identify America's top business leaders so that Trump would place in it. A little over a year later, as Trump was preparing to enter the Republican presidential primary, Gauger says that Cohen asked him to fix a Drudge Report poll regarding Republican primary candidates.

In both cases, the Journal reports, Cohen asked Gauger to write a computer script that would vote for Trump repeatedly in the poll in question. It's unclear whether or not this is the method Gauger used, and if so, to what extent his efforts affected the results of the polls. According to the Journal, Trump did not place within the top 100 in the 2014 CNBC poll; he placed fifth in the Drudge Report survey, garnering about 5 percent of votes.

Gauger tells the Journal that Cohen promised to pay him $50,000 for these surveys but that he was ultimately only paid between $12,000 and $13,000. Gauger says that Cohen paid in cash, handing him a Walmart bag with the money in it during a meeting at Trump Tower in early 2015. Cohen denies this, telling the Journal in a statement that "all monies paid to Mr. Gauger were by check."

Gauger says he was never paid in full. But the Journal, citing a government document and a "person familiar with the matter," reports that Trump nevertheless reimbursed Cohen in 2017 for the full $50,000 that he reportedly promised to pay Gauger. According to the Journal, that payment was facilitated by Trump Organization officials but came "largely" from Trump's personal account.

In a case unrelated to his reported dealings with Gauger, Cohen was charged in 2018 with campaign finance fraud, tax evasion, and lying to Congress after having his office raided by the FBI. He pleaded guilty, and says that on Trump's behalf, he facilitated payments to several women who alleged that they had affairs with Trump to stay silent during the presidential campaign. Trump denies all allegations of extramarital affairs, although the president acknowledges that he reimbursed Cohen for one of those payments. Cohen has been sentenced to three years in prison.

The Journal reports on Thursday that, in addition to asking him to rig polls for Trump, Cohen had Gauger create the Twitter account "@WomenForCohen," which is still live but hasn't been updated since December 2016.