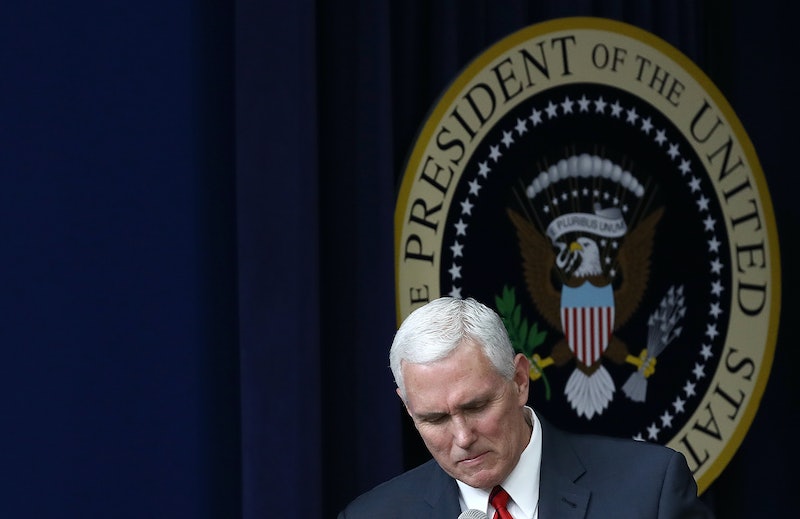 Mike Pence's anti-abortion legacy in Indiana is under attack from the most unlikely of foes: the Constitution. An Indiana federal judge blocked one of Pence's anti-abortion laws, which was a clear victory for those who believe that women should not be forced to undergo useless procedures in order to exercise their right to an abortion. Luckily, the nation's founding document also maintains that women should have that right — and so Pence's law suffered a defeat in court at the hands of U.S. District Judge Tanya Walton Pratt.

Specifically, the law required women to get an ultrasound at least 18 hours before actually getting an abortion. This meant that women had to go to the medical facility twice on subsequent days, which caused significant problems for women who needed to get time off work or childcare. This was especially burdensome for low-income women, for whom the costs of travel, childcare, and missed wages were simply too much.

The purpose of the law, the state claimed, was to bring down the number of abortions by making women see their ultrasounds. Women would see the picture of the insides of their wombs, they said, and then decide against having the abortion. According to the judge's opinion, however, the state "presents little evidence, and certainly no compelling evidence, that the new ultrasound law actually furthers that interest." Add in the part about what the judge called "an undue burden on a woman’s right to choose to have an abortion", and you've got yourself an unconstitutional law.

This isn't the first one of Indiana's laws that Judge Pratt has come up against in court, and it isn't the first one that she's blocked. Back in the spring of 2016, she blocked a law that would have banned abortions based only on genetic abnormalities. And those weren't Pence's only attacks on a woman's right to choose — he's got an anti-abortion record longer than anyone else's in Washington. After he became governor of Indiana, the women of Indiana got the full brunt of his position, as he signed every piece of anti-abortion legislation that came in front of him.

The women of Indiana aren't out of the woods yet, but they will hopefully be helped by the fact that states now have to prove that the obstacles they place between women and their medical care actually accomplish their stated purpose. As it's unlikely that many — or any — of them do, Pence could start to see more of his legacy in his home state come crumbling down.