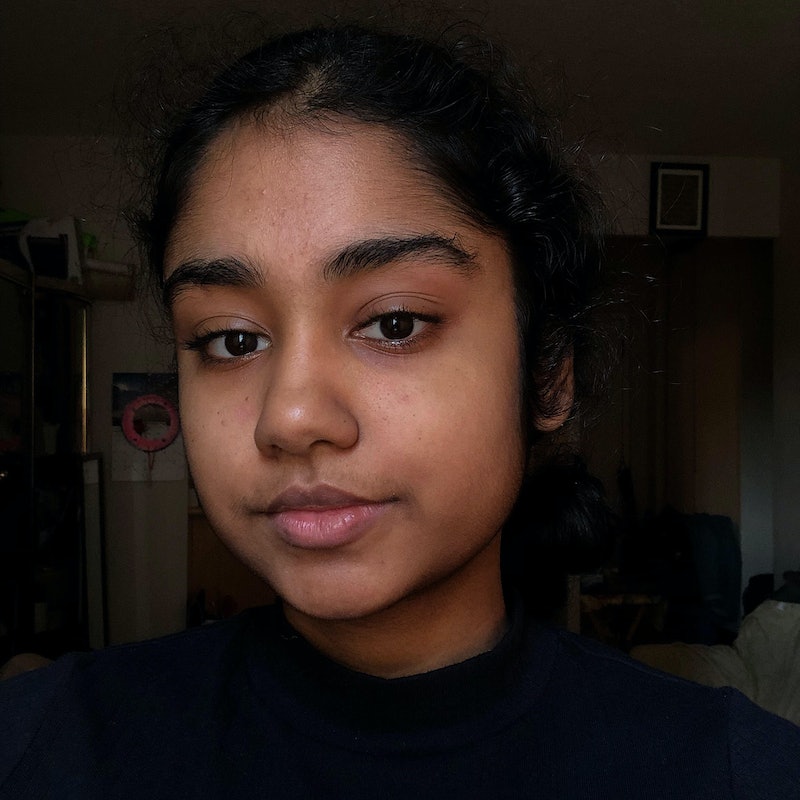 In tenth grade, I took an online Myers-Briggs type indicator test, and it said my personality type was “The Mediator.” A counselor or therapist were jobs that would suit me. Therapist was ironic because I couldn’t yet handle my anxiety. Marriage counselor was funny to me because my parents had been divorced for almost my entire life. Still, the idea of mediation stuck with me. I had always felt that it was my duty to referee my divorced parents’ conflicts. As a girl child of Indo-Guyanese immigrants, I also felt the burden of duty and respect toward my parents, while advising them about what they should or should not say to each other. I had to be careful with the words I chose for fear of sounding disrespectful. And this balancing act contributed to a lot of anxiety as I grew up.

My mom would always ask me if she thought she'd said something wrong after she hung up on my dad. But for me, it wasn’t about choosing sides. I was taught to value my elders above all, even if it meant sacrificing my emotions and silencing my thoughts. This is an idea that was spread amongst my Guyanese family members. As a result, I felt pushed to protect my mother and subdue my father. If I didn’t have my parents' approval, I assumed I would lose the only physical and emotional supports I had, so I sided with both of them whenever they needed me to. As long as I was being cared for, I felt that I didn’t need to have my own opinions.

Turns out, I wasn't alone. Many children of separated parents experience sensitivities to the needs of their parents during a destabilizing event like a divorce, according to research done by the School of Psychology in the University of Ottawa. This is true for children of all ages. It's around ages six to eight that children start to think more abstractly and feel the pressures of guilt, taking-sides, and anxiety. For me, this was the age I felt both the burden to keep the peace between my parents that I couldn't quite explain, and the added pressures of the cultural expectations around my duty to be a good daughter.

I love my parents. But love and respect is not the same as pushing our feelings aside in favor of protecting someone else's.

At the time, I didn’t know that I was also facing anxiety issues. I stuck my head in a Percy Jackson book to drown out my racing thoughts. My heartbeat sped even when I was lying down to go to bed, and sometimes I would listen to see if my parents were talking on the phone to make sure they weren't fighting. I felt trapped in between two people, and the worst part about it was that they loved me — and I felt guilty for feeling trapped by their love. When my struggles with generalized and social anxiety disorders manifested themselves into physical stomach pain and digestive issues, I didn’t have the words to tell my parents I was scared. I let them believe that I was feeling physically sick or constipated, or had eaten something bad. My anxiety was not directly caused by my parents, but it was worsened by forcing myself to achieve a level of emotional maturity I couldn’t possibly have at that age. It took its toll on my emotions and my body. When I felt helpless, I cried, and so I cried all the time. It was my only way to show my mother how I was feeling.

Most of these emotions were hidden from my father. I also hid them from other friends and family. But hiding these emotions from people, especially my father, just made me more frustrated. I would visit my father every weekend growing up. He fulfilled his fatherly duties, but I felt suffocated by a situation I didn’t want to be in. When I was very young, I cried and threw up on his freshly vacuumed car seats and sofa cushions. As I got older and my childhood anxiety grew deeper, I started to disassociate at his dinner table, or take three-hour naps to fill the time I had to spend at his house. I didn’t want to be there, but I said nothing because I thought that it was the morally right thing to do.

Throughout my life, I'd known my father to have a short fuse. The way his temper would flare up in the customer service line at Walmart, or the way he talked to my mother on the phone, were parts of his personality that I didn’t have the power to stop.

Through it all I believed the idea of duty to my parents that had been instilled in me by my Guyanese relatives. The idea that no matter what you do, you must always defer to them. It’s still there, to some extent, when I feel overwhelming guilt at ignoring my fathers’ calls and texts. When I got my own cell phone at the age of 14, I decided to take breaks from talking to him to temporarily relieve myself of the tension of our relationship. I still do this now, as an adult. Even though there are some anxieties of duty I might never grow out of, I realize now, through the help of a therapist and my own reflections, that my mistake was thinking that my parents would somehow turn their back on me for not complying with whatever they said. That’s another huge anxiety that many children of immigrants are likely familiar with, one that's often strongly linked with guilt.

I love my parents. But love and respect is not the same as pushing our feelings aside in favor of protecting someone else's. It’s hard to come to terms with the fact that actually, you don’t owe anybody anything. It’s hard to let go of such an automatic response because childhood trauma makes it harder to tolerate everyday triggers as an adult.

I'm lucky to have people that want to listen while I rant and are just as happy sitting in silence with me during a tough time.

The anxiety I felt from mediating my parents' issues now complicates my social life. I grow numb when someone asks me what I want to do, or where I want to go. I can barely decide where to eat when friends ask, because I never think about myself. Thinking that I am responsible for making decisions that determine my life course is an intimidating reminder than I must make choices to protect myself and consider my emotions before anyone else’s. But as much as being proactive scares me, maybe it is the closest I will get to becoming free.

As life goes on, I must pay attention to myself. I choose to honor the legacy of my aunties and grandmothers by breaking the cycle of silence and making myself seen. If there is any duty I have to perform, it is this one. For me, talking about my past with friends, therapists, and my mother are the ways that I can try to gain the power I was deprived of. My therapist has taught me to start recognizing what my needs are and how to fulfill them without needing approval. My friends have helped me realize that those needs are important. I'm lucky to have people that want to listen while I rant and are just as happy sitting in silence with me during a tough time.

Sometimes when my mother and I fight, she makes the mistake of telling me that I am like my father. We have both acknowledged the problems with her saying this, and the deep way it hurts me. We have identified each other’s triggers. But a part of me knows that it is true. I have his toes and curly body hair. Sometimes I flare up, yell, or hurt. I am forever dealing with this as a part of me, and I have tools to do this. I have come to realize that my mother was brave. Leaving your husband wasn’t something the generation before her was often known to do, even if they were facing verbal or physical abuse. Taking care of yourself was seldom practiced. Now, it should always be.

I probably will never be a marriage counselor, and maybe I will be a therapist. But if I ever have children, paying attention to their own needs is the first thing I will teach them.