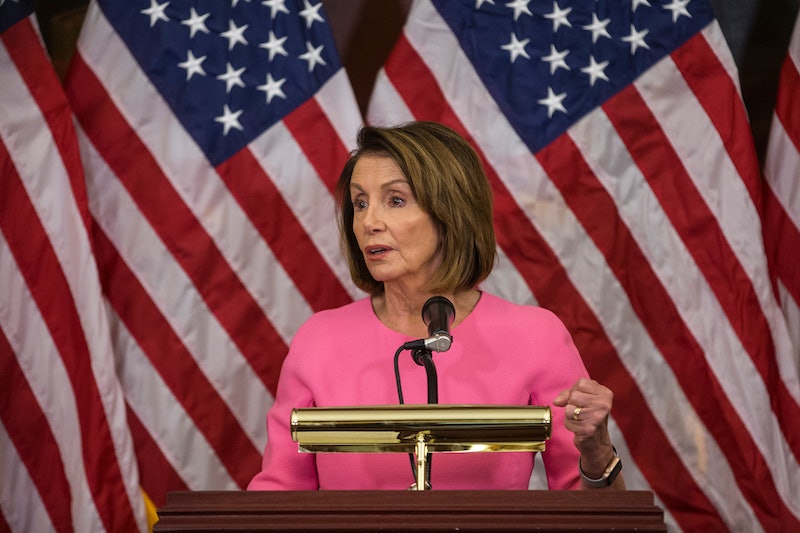 In a CNN interview on Tuesday, the current House Minority Leader spoke about the importance of supporting and teaching the next generation of female politicians. Among other topics, Nancy Pelosi said Congress needs more young moms in its ranks, and that she is in "awe" of those she currently works alongside. She further added that experiencing motherhood had the effect of making her more efficient as a person.

"I want more young women in Congress who are in the course of raising their children, because it's important for women in that situation to see someone who shares their experience at the table," Pelosi explained. She added:

Being a mom, what are you? You're a diplomat, interpersonal relationships. You're a chef. You're a chauffeur. You're a problem solver. You're a nurse. You're a health care provider. You have so much, and that's just with the children, not to mention the other aspects of family.

Pelosi, now a grandmother, had her five children over the course of six years. And as one of the more senior Democrats in Congress, she is making a point to tell women to speak up for their achievements and fight for what they've earned.

Pelosi said, "For most women, frankly, myself included, it is hard to say those words, 'I am uniquely qualified. I deserve this. I earned this. I can do this better than anyone else.'"

When CNN's Dana Bash told Pelosi it was hard for her to say those words, too, Pelosi replied, "You know why I do it? I do it, because I want women to see that you do not get pushed around. You don't run away from the fight."

Later on in the interview, Bash pointed out that Pelosi's advice for women was not only applicable to the world of politics, but for women everywhere. Pelosi asked, "Have you ever been to a meeting when you're at the table, and a woman makes a suggestion ... and then two persons later a man makes the same suggestion, the other gentleman at the table say, 'That's a great idea'?"

When Bash said yes, Pelosi replied, "What I have learned later in life, I've concluded ... they did not even listen to the woman. That's why I say to people, 'Make sure that you have a give-and-take on what you suggest, because some man's going to get the credit for your idea.'"

In discussing the 2016 election, Pelosi confirmed that she would have retired from politics, had Hillary Clinton won the presidency. But when Trump won, Pelosi decided to stay so that there would still be at least one woman at the table for top-level meetings.

And surprisingly, Pelosi is one of the few Democrats that Trump has found words of praise for: Last week at a news conference, he commended Pelosi for her bipartisanship. "I gave her a lot of credit, she works very hard," he said. "I give her a great deal of credit for how she's worked and what she's accomplished."

Pelosi is currently campaigning to be House speaker again for when Congress begins its next term in January. Her parting words to Bash were a simple and profound piece of advice for women everywhere: "You know what the subjects are. You know how to get it done. Be your authentic self. Be yourself. Know your power."