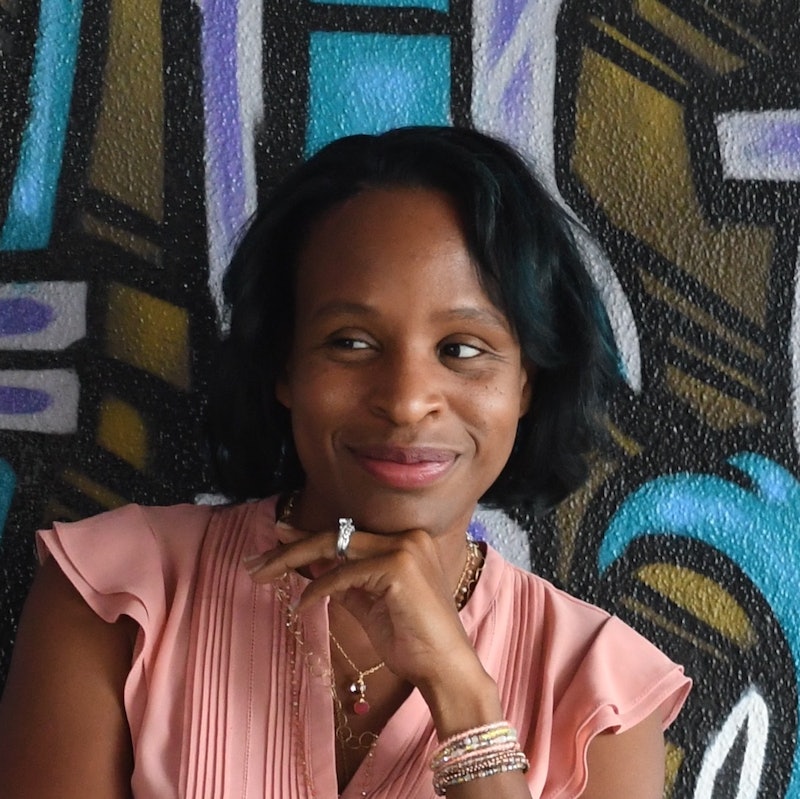 One of the most anticipated teen big screen dramas this summer — and, let’s face it, ever – hits theaters this weekend. Everything, Everything, starring Amandla Stenberg and Nick Robinson, is a summery teen romance between Maddy, the proverbial girl-in-a-bubble, and Olly, the literal boy next door, who just might free her from her cage (even if it kills her). Sound swoonworthy? It totally is.

And the reason the story exists at all is just as heart-melting. Nicola Yoon, the author of the young adult novel the movie is based on, says she wrote it so that her daughter could see a reflection of herself on the page. “When I was growing up, I didn't see myself reflected in books very often,” Yoon tells Bustle. “Maddy looks the way she does in the book because my little girl looks like that. I wanted my daughter to be able to see herself in media. It's important that everyone get to see themselves as the hero of a story.”

“I knew that eventually I would tell her that she could be anything she wanted, and that she should follow her dreams — and I wasn't following mine.”

Nicola’s daughter also inspired Yoon to chase own dreams – without saying a word. “One day I was looking at my little girl when she was just a couple of months old,” she says. “I knew that eventually I would tell her that she could be anything she wanted, and that she should follow her dreams — and I wasn't following mine.”

Everything, Everything by Nicola Yoon, $7, Amazon

So she decided to start writing seriously, despite having an infant at home and a full-time career. “I started writing the book when my little girl was four months old, and it was primarily inspired by my nervousness at becoming a new mom,” Yoon says.

An electrical engineering major in college, Yoon discovered her knack for writing by accident. In need of an elective to fulfill her senior year requirements, she decided to take a creative writing class. “[I] wrote terrible unrequited love poetry dedicated to a boy I was in love with who did not love me back at all,” she says. “The poetry was bad, but I got hooked on writing. Fast forward twenty or so years, and I was working at a job that I absolutely hated and still dreaming of being a writer.”

That’s when Maddy’s voice beckoned. “I heard her saying the first line of the book in my head,” she says. But “to create Olly, I had to decide what kind of a boy would fall in love with a girl like Maddy. One of the most fun parts to write was the text messages between Maddy and Olly before they meet. They fall in love with each other's brains and personality quirks before physical attraction enters into it.”

"One of the themes I wanted to explore with this book is how vulnerable we are willing to make ourselves for a big love. Is love worth risking things for? How can we survive love's loss?”

And the physical separation, while excruciatingly delicious, also gives the romance between the two teens a startling depth – after all, falling in love is a life-or-death decision for Maddy. “I think of the book as a fairytale,” Yoon says. “It's really about pushing against boundaries (as most teens do) and the risks we're willing to take for love. Love is wonderful and amazing, but its loss can be devastating. One of the themes I wanted to explore with this book is how vulnerable we are willing to make ourselves for a big love. Is love worth risking things for? How can we survive love's loss?”

Yoon’s work – which includes her sophomore effort, the National Book Award-nominated The Sun Is Also A Star, plays heavily with the idea that one big love can change everything.

The Sun Is Also A Star centers on “a poetic boy named Daniel who tries to convince a science-minded girl named Natasha to fall in love with him over the course of 12 hours in New York City,” Yoon says. “They only have 12 hours because Natasha's family is being deported to Jamaica at the end of the day. Primarily, it's about the ways in which a big love can change your life — both for the better and for the worse. It's also about the immigrant experience in America, the ways in which we are — as Maya Angelou said — more alike than unalike and the ways in which we are all connected to each other. It's about fate versus coincidence, art versus science, following your dreams versus doing the practical thing.”

"I know the immigration discussion is complicated, but I'd love for the policy conversations to start from a place of empathy.”

The Sun Is Also A Star feels more relevant than ever, given the Trump regime’s anti-immigrant policies. “I really didn't expect that the story would resonate so strongly,” Yoon says. “I really just wanted to tell the story of these two kids falling in love and also humanize the immigration discussion. So often when we talk about immigration, we talk about it in terms of politics and policy instead of talking about people. Immigrating to a new country is an act of bravery and hope. People leave behind their country, family and language, all in search of a better or different future. Immigrants want the same things that we all want — a future filled with hope and possibility. I know the immigration discussion is complicated, but I'd love for the policy conversations to start from a place of empathy.”

And in the end, she knows, people love a good love story. She's got her own to share, too. Her husband David Yoon, a graphic artist and writer, drew the illustrations for the book version of Everything, Everything — some of which ended up on the big screen, too.

“I'll tell you the story of the first illustration we decided to include,” Yoon says. “I wrote the book from four to six a.m. over the course of three years. One morning I had this idea that Maddy would draw her world as a way to feel like she was more a part of it. I’m obsessed with Hawaii, and I decided that Maddy would be too. So I had her draw the Hawaiian state fish — the Humuhumunukunukuapua’a. I’m terrible at drawing, so I woke my husband up (at four a.m.!) and asked him to draw it for me. He’s a terrific artist and also a super sweetie. He got up, gave me a kiss, made himself some coffee, and drew the version of the fish that appears in the book today!”

So it’s no wonder that watching the book come to life on screen was surreal for the pair. “Surreal is the exact right word!” Nicola says. Watching the movie on the big screen for the first time, “David and I cried the entire time. One my favorite moments being on set is day I got to film a cameo in Mexico with my husband and my little girl. Look for us when you go see the movie — we're on the beach splashing in waves!”

And as for the book’s original inspiration, well, Everything ,Everything lived up to Nicola’s daughter’s great expectations, too. “She loved it. She said that Amandla looks just like her and that she was beautiful.”

Everything, Everything by Nicola Yoon, $7, Amazon