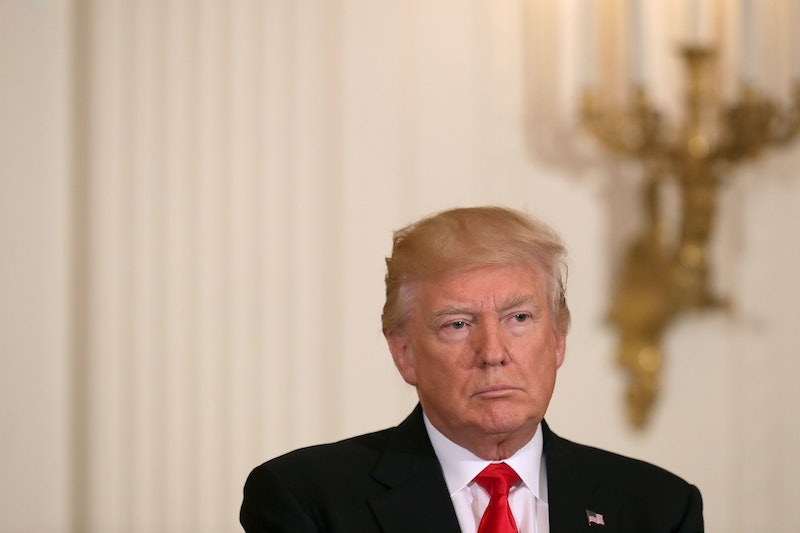 We know President Trump likes his surname. It appears prominently on buildings he's either invested in or licensed out his name to, all over the world. He sometimes speaks about himself in the third person, and when he does, it's not as "Donald." Trump likes Trump. Apparently, his staff has caught on to that, and they've started to leverage his love of the Trump name to their advantage. His National Security Council (NSC) has sprinkled Trump's name in its memos to him as many times as they can, because apparently, the president will keep reading if he sees his name coming up.

The detail is included in a report by Reuters on Trump's upcoming meetings with leaders overseas, the first foreign travel for the new president. Trump's trip comes fresh off the heels of several controversies — firing FBI Director James Comey, revealing espionage intelligence to Russian foreign officials, and allegedly having pressured Comey to back off his investigation into Trump's first national security adviser, Gen. Michael Flynn.

Considering his domestic struggles, so to speak, Trump is under enormous pressure to make this international debut a success. And considering Trump's reputation for a short attention span, NSC officials who prepare memos for the president "have strategically included Trump's name in 'as many paragraphs as we can because he keeps reading if he's mentioned,' according to one source."

Further imperiling a gaffe-free ten days abroad is Trump's general aversion to travel. Although he covered considerable distance during the 2016 campaign, Trump would often fly home for the night rather than sleep in an unknown hotel. Out of his routine and comfort zone, an unpredictable president could become even more liable to make headlines for the wrong reasons.

His trip to Scotland during the 2016 campaign was not widely considered a success. For starters, he seemed less energized than normal, perhaps due to jet lag. But he also confused Scotland with Florida at one point in a speech, a strange mix-up for any person running to be POTUS. Trump also tweeted out a congratulations to Scotland for voting to leave the European Union, apparently unaware that the Scots were hugely against Brexit.

Trump will be traveling to Israel, Saudi Arabia, the Vatican, Brussels, and Sicily. It's a jam-packed schedule, and it requires an array of foreign policy expertise that some on Trump's team fear he simply does not know or comprehend. After meeting with Trump last week, one unnamed official said he is not confident the president has a "firm enough grasp on the nuances of the long-running Israeli-Palestinian conflict."

Foreign policy is always tricky. But for someone who enjoys speaking freely and bluntly, the opportunities for miscommunication, embarrassment, and even estrangement are vastly multiplied. Perhaps seeing his name in print helped Trump to pay an adequate amount of attention to the details of his foreign counterparts. It's a ridiculous strategy, but the NSC deserves credit for trying whatever might work to focus a distracted and seemingly uninterested POTUS.