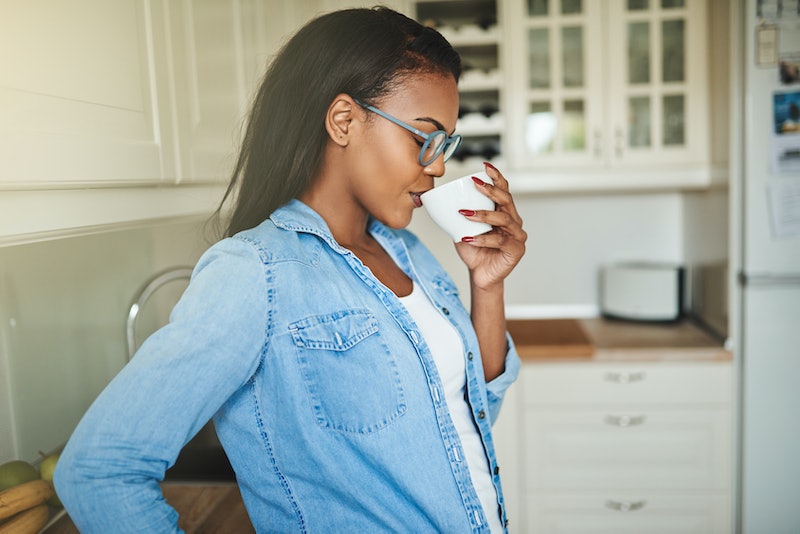 Fall has fully arrived now, which means lots of colds and sniffles are going around. And while common sense self-care for colds — like getting plenty of rest and fluids — is key, there is also a powerful little herb that can help a lot. Oregano oil has major health benefits for colds that can help you feel better when you’re sick, and there are so many reasons to keep this supplement in your kitchen this cold season. Trust me, as someone who just kicked the mother of all crappy colds this past week, oregano oil extract helped a ton.

Oregano oil, also called oil of oregano, is an herbal supplement derived from your favorite pizza sauce seasoning — yes, oregano. In its highly concentrated form, as with supplements and extracts, it’s known for its anti-inflammatory, antiviral, and anti-bacterial properties, according to Healthline. Oregano oil is traditionally used to ward off respiratory illnesses like coughs, sore throats, colds, and bronchitis. Healthline further notes that oregano oil contains a number of potentially immune boosting and healing compounds, and has a high antioxidant content, too. According to Well + Good, oregano oil is great superherb to reach for just as you feel a cold coming on.

Dr. Darria Long Gillespie, Harvard and Yale-trained ER doctor and author of MomHacks tells Bustle via email that while more research is needed to confirm the beneficial effects of oregano oil for your cold or flu, "Oil of oregano does have some substances that could have beneficial effects."

According to a study published by the National Institutes of Health (NIH), the compound carvacrol, found in herbs like oregano, has antimicrobial and anti-inflammatory properties, and may help you kick your cold. And a 2011 study, also published via NIH, found that oregano oil also has strong antiviral properties, Healthline further reports.

That said, some side effects can occur, Dr. Gillespie also notes, but these are usually pretty mild. If you find that oil of oregano is helping you kick your cold, feel free to take it, just make sure that you aren't "taking any medications that could interact with it," Dr. Gillespie says.

So, what’s the best way to get the most out of your oregano oil supplements? You’ll want a really concentrated form of the herb for therapeutic effects, like you’d get from a soft gel capsule or an extract — the dried herb from your spice rack isn’t likely to do much for your cold. (But it will make your marinara sauce more delicious.) You can buy it on Amazon for around $20 dollars for a bottle of capsules, or $10 for a small bottle of essential oil. (Just make sure you're getting oregano essential oil, not oregano-infused oil.) Oregano oil in its essential oil form can be added to a steam diffuser, or you could inhale from a bowl of steaming hot water. For internal use, opt for an oregano oil tincture or a soft-gel capsule, Healthline further suggests.

While oregano oil is safe to take internally, there are some people who shouldn’t take it, according to Healthline. If you’re allergic to basil, lavender, mint, or sage, you may also react to oregano oil. Also avoid it if you’re pregnant or breastfeeding. You should also talk to your doctor before taking oregano oil if you have a bleeding disorder, or if you’re on any blood clotting medications. If you have any side effects after taking the supplement, such as stomach pain, dizziness, headaches, or muscle pain, stop taking it, and check in with your doctor as soon as you can.

Everyone can agree that colds are the absolute worst, but with some extra self-care, you can be back to feeling like yourself sooner than you'd think. Double up this winter by getting your flu shot and stocking up on remedies that can make you feel better faster.