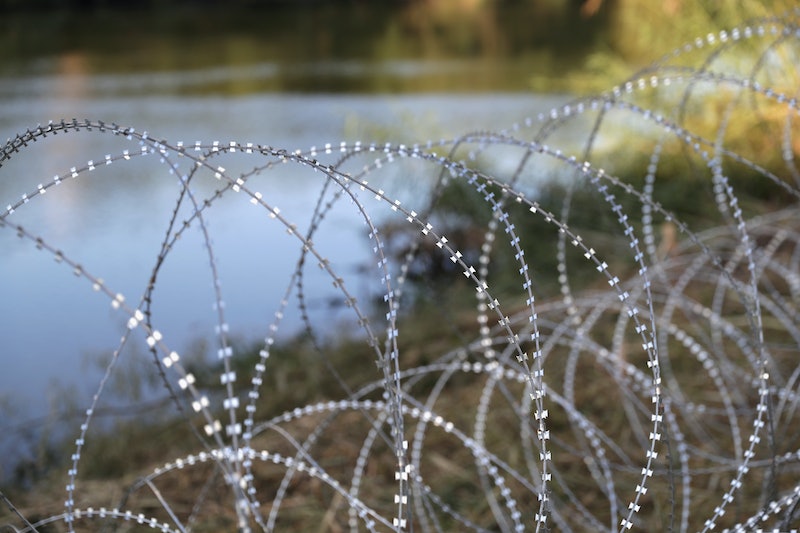 President Donald Trump has said that up to 15,000 military troops could be deployed to the U.S.-Mexico border to meet the migrant caravans slowly making their way toward the border from Central American to request asylum. But according to a new report from CNN, the Pentagon has denied one White House border troop request, reportedly citing concerns the request wanted active duty soldiers to perform tasks beyond their authority.

Sometime last month, the Department of Homeland Security (DHS) reportedly requested active duty troops be sent to the border to operate as a "reserve force" and perform duties two unnamed Department of Defense (DOD) officials characterized to CNN as being typical of emergency law enforcement. But while the Pentagon has approved other White House requests for border support, CNN reported the Pentagon opted to deny this specific request on Oct. 26.

"DHS has not requested that DOD preform law enforcement functions at the border — those are the responsibility of [Customs and Border Protection]," spokesperson Katie Waldman tells Bustle. "The requests made under the RFA to DOD are solely to be in a supporting role to DHS at all times."

According to CNN's Ryan Browne, the troops were wanted to "protect Customs and Border Control officials" and to "provide riot control and traffic control." According to CNN, the Pentagon reportedly felt those tasks, which they reportedly characterized as "law enforcement actions," fell beyond what active duty soldiers are authorized to do. Bustle was unable to reach the Department of Defense for comment.

A Department of Homeland Security official pushed back on the Defense officials' characterization in a statement to CNN. "While DHS has discussed the need for potential assistance with force protection of CBP personnel, calling this line of support 'law enforcement activities' would be factually inaccurate," the DHS official told CNN.

What's more, the Pentagon's rejection of the request hasn't appeared to have caused the president much pause. On Wednesday, Trump said he was willing to send up to 15,000 military troops to meet migrants at the border, a number double what the Pentagon mentioned just two days before.

"As far as the caravan is concerned, our military is out," Trump told reporters. "We have about 5,800. We'll go up to anywhere between 10,000 and 15,000 military personnel on top of Border Patrol, ICE, and everybody else at the border."

According to The Washington Post, Homeland Security and DOD officials said Monday that they would initially send roughly 5,200 troops to the U.S.-Mexico border in response to the migrant caravans but could potentially send additional troops later. The paper noted that more than 2,000 National Guard troops are already stationed at the border.

On Tuesday, however, the general who commands the agency within the Department of Defense that provides military support to non-military authorities said they'd be sending more than the initially reported 5,200 troops. According to Time, Gen. Terrence O'Shaughnessy did not elaborate on exactly how many troops would be sent in total, but claimed a news report circulating at that time, which reported up to 14,000 troops could be sent, was "not consistent with what's actually being planned."

Estimates of the caravans' size have placed the number of migrants making their way toward the border at anywhere from 4,000 to more than 6,000 with multiple smaller groups comprised of several hundred migrants trailing behind.