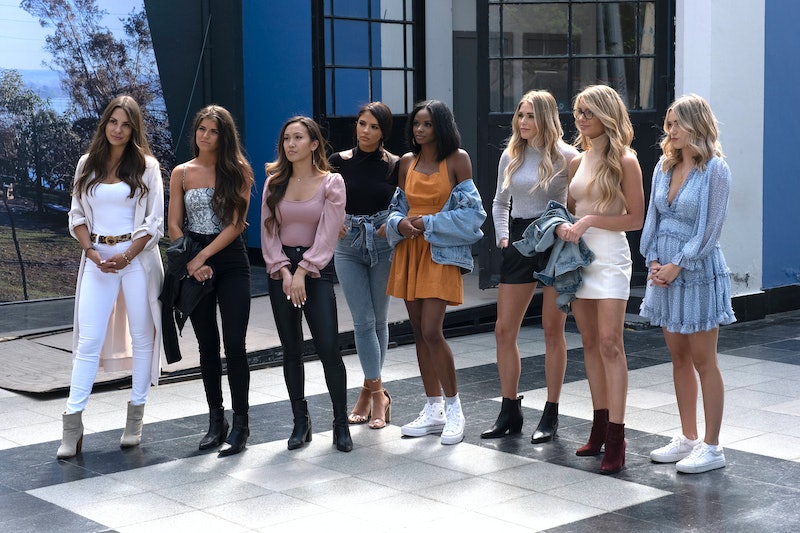 Peter Weber's season of The Bachelor may have come to a close, but the drama between some of his contestants is still far from over. In fact, several of Peter's Bachelor exes created a TikTok collaboration that is so good it probably belongs in a museum. It also gave one ex, Madison Prewett, the perfect opportunity to throw some shade at Kelley Flanagan, who has been spending an awful lot of time with Peter these days.

Madison, who left The Bachelor in the finale, posted the video with the caption "Bachelor Girls get ready — quarantine style." The short TikTok challenge features Madi, Tammy, Mykenna, Kelsey, Kiarra, and Deandra all transforming their looks from casual to glam with the wave of a magical makeup brush while jamming out to "Take Your Man" by Mahogany LOX.

Putting a Bachelor twist on the #DontRush challenge is pretty great, and hopefully enough to revive any other Bachelor-related videos out there — even from Hannah Brown and Tyler Cameron's Quarantine Crew. (Sorry, not sorry.) The makeup brush gets passed around from person to person, assisting each of them with their various "get ready" looks. Though, of course, they can't actually go out anywhere in the post-quarantine world, but it's a fun concept nonetheless and proves that each of them are over Peter and are standing united in this social distancing era.

But while the video itself is engrossing, it's the comments that seem to stir up some drama. It's impossible not to notice that several of Peter's Bachelor contestants were left out of the ensemble. Where is Hannah Ann? What about Victoria F. and Natasha? It turns out that there's more to this video than meets the eye. "This was only half the squad," Madison commented under the video. "Couldn't fit everyone but maybe I'll do a part 2?!"

However, if you're thinking Kelley will turn out to be one of those participants, think again. When one fan asked where the Chicago attorney was in the clip, Madison responded by saying, "with our ex lol." Oh, the shade!

The remark is a jab to the fact that Peter and Kelley have been quarantining together over the past several weeks, though they appear to have gone their separate ways for the time being. Their time together has prompted many fans to speculate that the two of them are now dating — a rumor that Peter has since addressed while chatting with Nick Viall on his podcast The Viall Files. "We're not dating," Peter confirmed. "Could I see that in the future? Yeah, of course. I'd be extremely lucky and very happy if that happened."

And if it just so happens to inspire more top-notch TikTok content in the process, then so be it.