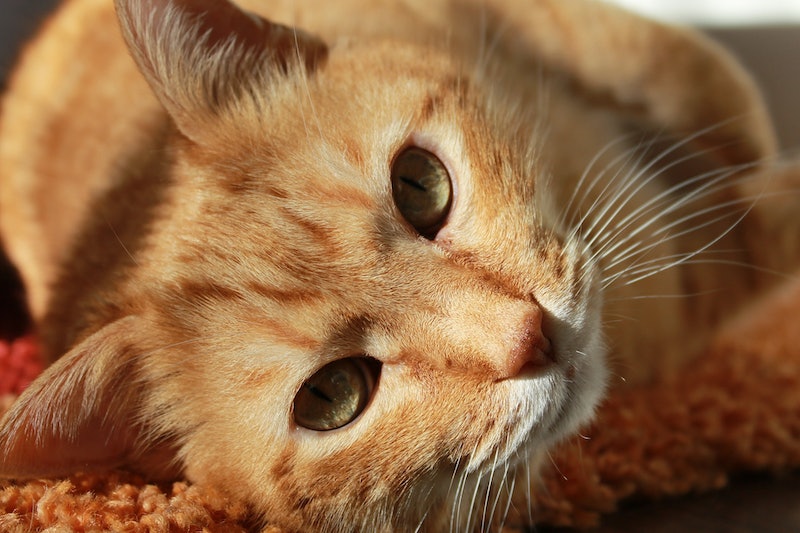 Attention lovers of all things furry and feline: pictures of the world's "longest" cat have surfaced on the Internet and they couldn't be more adorable. Meet Omar, the super-sized Maine Coon in contention for the Guinness World Records' title of "World's Longest Domestic Cat." The three-year-old from Melbourne, Australia reportedly clocks in at an impressive 120 centimetres (47 inches) long, weighing a total of 30 pounds. Once verified, he could unseat the current living record holder, UK-based Maine Coon Ludo, who is a stately 118 centimeters (46.5 in). Omar still lags behind longest cat in recorded history, a Maine Coon named Stewie, who was a total of 48.5 inches, but needless to say, Omar is a lot of cat!

Adopted by Stephy Hirst and partner Rowan Lawrence in 2013, the then 12-week-old orange kitten appeared to be the same size as the rest of his litter. However, his owners knew he was special when he weighed over 22 pounds at only a year old. Nicknamed "gentle giants" and "the dogs of the cat world," ever curious and friendly Maine Coons have become extremely popular on social media. A trend of owners fluffing out the fur of their Maine Coons and holding them aloft so that they appear longer makes for some pretty impressive pics.

Omar has found similar internet fame, quickly becoming an Instagram sensation in the two weeks since his owners set up the account. Since joining social media, Omar has racked up 18,000 followers, and a photo displaying his hefty size was shared over 270,000 times on the Cats of Instagram account. Starting as a viral sensation in the Australian media, Omar's popularity has grown to the point of being featured in a Twitter moment on May 17.

According to the BBC, a regular day for Omar consists of waking up early and enjoying a hearty breakfast of a few scoops of dry kibble. Then it's on to a full schedule of relaxing around the house, playing in the backyard and on the trampoline (which you can see on Instagram), and a few more naps until dinner. The couple feeds him raw human-grade kangaroo meat as it is "the only meat we could find that he actually wants to eat," Stephy explained to the BBC.

While it's true that Omar is always keen on finding a warm shaft of sunlight to nap in, the jury is out on whether the celebrity cat is enjoying his 15 minutes in the spotlight. "He's just looking forward to napping on the trampoline, chowing down on some more kangaroo and trying to keep us awake at night," Stephy Hirst told the BBC. "I think he'll be glad to go back to being a normal housecat." Depending on the verdict of the Guinness World Records committee, Omar may have to learn to live with his newfound fame just as his owners have to live with being covered in fur.

More like this
TikTok’s “5-9 Routine” Trend Is Here To Boost Your Productivity
By Courtney Young
What Is "The Ick?" The TikTok Dating Term, Explained
By Courtney Young
How To Make The Grinder Sandwich TikTok Is Obsessed With
By Emma Garza
What Does It Mean To Be “A Pick Me Girl"?
By Courtney Young
Get Even More From Bustle — Sign Up For The Newsletter