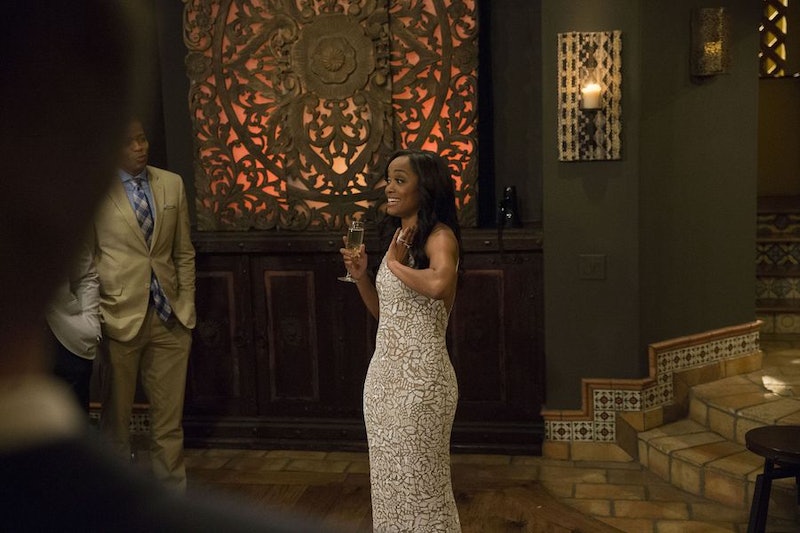 I don't think anyone has portrayed themselves on reality television as well and as naturally as Rachel, the latest Bachelorette. In the show's first handful of episodes, she navigated the usual drama (choosing which men to bring to the next round, embarrassing attempts to win her affection, a scandal about an ex-girlfriend) with ease, standing up for herself and refusing to be caught off-guard by anything, always prepared with a big smile and a laugh at awkward moments. But, amazing reality TV chops or no, Rachel is still a human being, and after what looked like a long night of competitive small talk with all of the suitors clamoring for more time with her, Rachel gave an emotional speech about being the first black Bachelorette, explaining how stressed out she is by the whole experience.

"The pressures I feel about being a black woman, and what that is, and how I feel..." she begins, getting truly emotional and overwhelmed. "I get pressure from so many different ways, and I did not want to get into all of this tonight. And I know already what people are going to say about me and judge me."

During the rose ceremony, Rachel still looks a little troubled, but by the time the whole cast takes a trip, she was back to her poised, carefully composed self. After spending a season fighting to win Nick Viall's heart, Rachel certainly must have known that it wouldn't be easy to be the Bachelorette, but even though she doesn't totally articulate what kind of pressure she's feeling in that moment, it kind of stands in for everything weighing on being the first ever black star of the franchise.

Black women are roundly criticized for any and everything "out of place," from their hair and their bodies, to the sound of their voices. Basically every famous black woman from Amber Rose to Leslie Jones has been the subject of intense, targeted criticism and harassment simply for being themselves. So far, Rachel hasn't been the subject of too much critique, but the historic dimension to her casting has made plenty of critics write that they're going to be reconsidering the series or watching it more closely — even Kareem Abdul Jabbar wrote that he agreed to appear as a guest because "Rachel distinguished herself as intelligent, athletic, playful, witty and emotionally mature."

So, for a moment, Rachel's veneer slipped, and she explained that maintaining that unimpeachable cool and likability is hard, especially when being put through the wringer of The Bachelorette production cycle. And that's all right, because the moment didn't feel exploitative, it genuinely felt like Rachel is very aware of the difficult balancing act she's attempting to pull off. She's doing an incredible job, and hopefully the pressure doesn't get too strong, because if anyone deserves to find love, it's her — and no one should judge her for the moments of emotional realness she has throughout that process.

More like this
JoJo Fletcher & Jordan Rodgers Got Married In A “Playful & Fun” Wedding
By Grace Wehniainen
'Heartstopper’s Joe Locke Wants To Be Disney’s First Gay Prince
By Sam Ramsden
Kylie Jenner Roasts Kendall For Her Cucumber Cutting Skills On TikTok
By Jake Viswanath
What’s New On Netflix: 'Stranger Things' & 'Somebody Feed Phil' Return
By Arya Roshanian
Get Even More From Bustle — Sign Up For The Newsletter