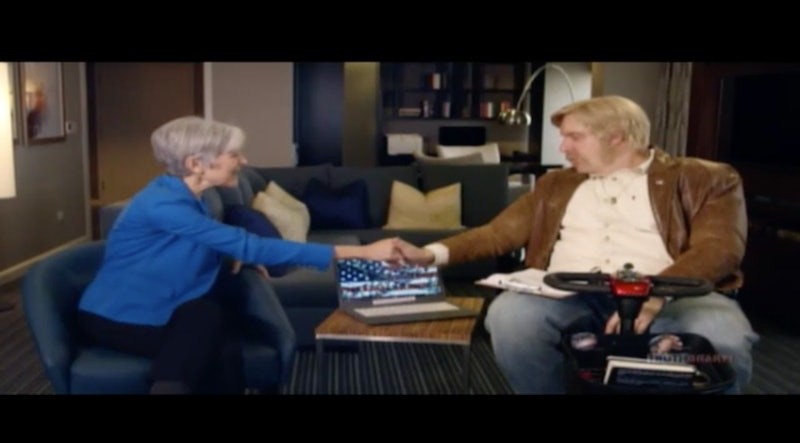 The spectrum of beliefs on climate and weather is as colorful as the rainbow. From those who staunchly deny climate change to those who side with the majority of scientists, the issue is one that sees a frustrating range of opinions. The show Who Is America? plays off this ignorance on climate in its latest episode with a prominent Green Party leader. Sacha Baron Cohen tricks Jill Stein into debating climate change with a series of hilariously porous arguments.

Stein, a former presidential candidate in the 2016 election, was duped into sitting down for an interview with Baron Cohen, who disguised himself as a mustached, Southern-accented character called Dr. Billy Wayne Ruddick Jr., who is right-wing and dependent on a motorized power scooter.

Ruddick started the segment off by introducing Stein as someone who is "peddling some Soros-funded conspiracy theory called global warming."

“I’m a scientist,” Stein said to Baron Cohen's character. “It’s pretty clear from the science that the climate is changing.”

To push back against her point, Ruddick brought out a graph that showed the weather patterns from 2010, in which temperatures were cool in winter months, hot in summer months, and cool again in the fall and winter months. "Temperature is cyclical," explained Ruddick with a straight face. "In July, it's really hot. The liberals will be freaking out saying we need to buy a Tesla from Lena Dunham."

A patient Stein then tried to clarify that climate change is tracked over years, not a single year.

“You’re demonstrating that the seasons change,” Stein said. “Seasons have always been changing throughout the course of a year.”

“There’s a lot of evidence the CIA was weaponizing weather,” Ruddick argued, holding up a sort of model blueprint of a helicopter with giant whisks attached to the bottom. “They would fly out helicopters over the last 16 years, into the ocean. Helicopters with whisks on and thereby create a hurricane.”

“Billy, you can’t create a hurricane by stirring the air up. Do you know what actually creates hurricanes?” Stein asked, to which Ruddick concludes that the helicopter whisks hurricane theory must be true because the eBay seller had 94.6 percent seller rating.

"It means the evidence is true!" Ruddick responded triumphantly. "Why can't you see the truth?"

In the interview, Stein tells Ruddick that she is a scientist. Her education is certainly not one to be taken lightly. Educated at Harvard University, Stein didn't have to go far for her medical school training — at Harvard Medical School. She has been an environmental health advocate since the '90s.

People who deny climate change often argue that only God, and not humans, can possibly change the atmosphere and affect the weather. Prominent conservative politicians have also ardently argued this point for years. Unlike other interviews on his show, Baron Cohen's interview with Stein doesn't serve to embarrass; rather, Stein serves as a foil to highlight the illogical beliefs some have on climate change despite scientific authority and evidence.