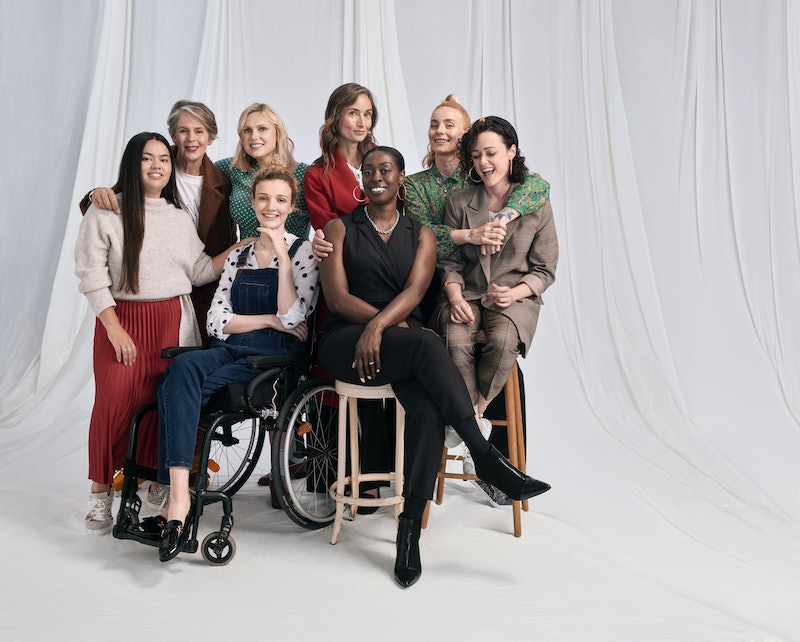 There are plenty of fashion campaigns around that promise inclusivity and empowerment and, well, fail. But Sainsbury's Tu has taken an inspiring message and advertised it the right way. The supermarket brand's #TuWorkIt campaign aims to give women a working wardrobe that works for them, whether that's opting for a more relaxed suit or upending formal office tradition and choosing a funky knit and vibrant skirt combo.

The new campaign features 14 women from a variety of backgrounds and who have taken on a range of careers. Quite a few are multi-hyphenates. There's Stefani, a skateboarder, designer, and CEO; venture capitalist and coding school founder, June; mother, author, and campaigner, Anna; and Kate, a charity founder and ballet teacher. Even Tu's own head of design, Anna, makes an appearance.

Other included careers range from a football club director and founder of a diverse modelling agency to a poet and antique textiles dealer. The point is that women are never just one thing, and they shouldn't be made to wear just one thing during the working week either.

Essentially, Tu is asking you to rip up the rulebook and wear what makes you feel like you. If that's a super sharp suit, so be it. But if you'd rather pair said two-piece suit with a pair of comfy boots than stuffy heels, do it.

As well as asking 14 different women to model its upcoming winter range (available in UK size 8 to 24), Tu has partnered with two of the women making waves in different worlds. Anna Whitehouse is the founder of Mother Pukka: a site full of news, reviews, and commentary for people who just happen to be parents.

In 2016, she was encouraged to start a campaign for more flexible working hours. She told ITV how she was reprimanded for being late to pick up her daughter from nursery, so asked her boss for more flexibility in her job. They said no. And the Flex Appeal campaign was born.

Whitehouse quit her job and began organising events across the UK to help people ask for a better work-life balance from their employers. She has worked with companies like McDonald's and is in talks with the NHS. "This is not for mothers, this is not for fathers," she told the channel. "This is for people suffering from anxiety, people living with disabilities, people with caring responsibilities, people just wanting to live."

Award-winning poet, author, and playwright Sabrina Mahfouz also stars in Tu's campaign. She doesn't just appear in the video; she's the voice of it.

"When we throw out the old workwear rules, we can't be told to wear a power suit to be empowered. We all like sharp lines sometimes, but what we like even more is the line: 'This look is a bit of me, it's mine.' It's all about what we need to put on, to push on, to break barriers down, to be a mother, a boss. Every single one of us going above and beyond to fill our lives with what we love. To work it. So go on, put it on."

So the next time you feel restricted by an uncomfortable rule, just shrug it off. No one said you can't break through the glass ceiling wearing jeans and trainers.

This article was originally published on Sep. 16, 2019