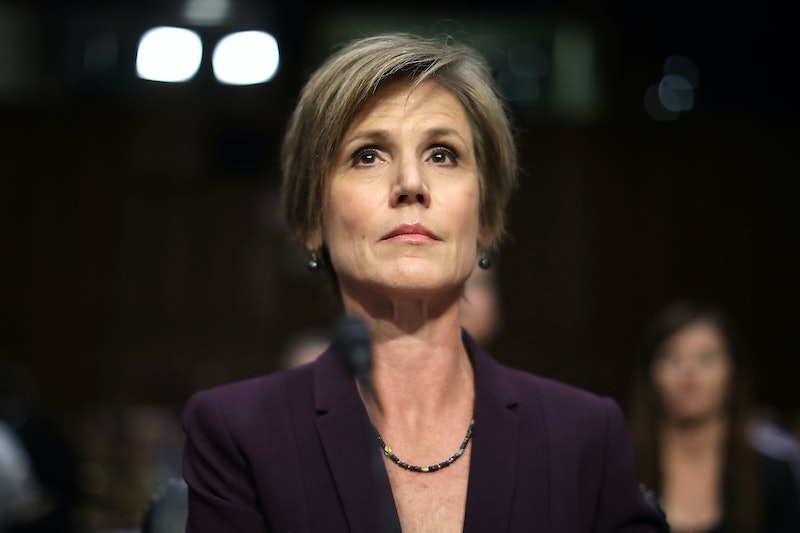 As you may recall, Trump's first executive order travel ban, the one to which Yates referred in her interview, was issued in January and immediately caused chaos in airports all over the world. Without warning, it banned refugees from Syria as well as travelers from Iran, Iraq, Yemen, Libya, Syria, Somalia, and Sudan from entering the United States. Several federal courts eventually blocked the ban (and its revised follow-up) from being enforced and Yates herself also instructed the Department of Justice not to defend the ban, citing its unconstitutionality. Shortly after announcing that she would not defend the ban, President Trump fired Yates.

During her interview with Cooper on Tuesday, Yates shed a great deal of insight into how the entire travel ban situation unfolded. Very interestingly, Yates told Cooper that the Trump administration never informed her — the acting Attorney General at the time — of the executive order before it was released. Instead, Yates noted that she found out about the ban after one of her deputies at the DOJ saw a report about it on the news and called Yates to inform her of its existence.

Yates indicated to Cooper that the fact that she did not know about the travel ban ahead of time was absolutely unprecedented. According to Yates, the Department of Justice's Office of Legal Counsel had been asked to review the executive order for "form and legality." She stated that the Office of Legal Counsel would normally inform the Attorney General about an executive order.

Yates expounded on the unprecedented nature of withholding a new executive order from the attorney general, something which is highlighted in this excerpt of her conversation with Cooper,

Cooper: The Department of Justice's Office of Legal Counsel was advised not to inform you specifically, the acting Attorney General, about this executive order?

Cooper: Do you know why you were not informed?

Yates: I don't know. And I wasn't informed.

Cooper: Is this normal procedure?

Yates: No, first I've heard of that.

Cooper: You've never heard of that happening before?

Yates' revelation that she was never informed of the travel ban before it was released is quite shocking, considering that, as Attorney General, she served as the chief legal officer of the U.S. government—and the travel ban was certainly something that subsequently raised many legal questions.

Yates went on to indicate that she spent the weekend after the travel ban was released extensively reviewing the content of the ban and announced to her department the following Monday that the DOJ would not be defending the order due to its constitutional issues. She said she believed the order inhibited religious freedom, a constitutional right, and was an attempt by the president to "make good" on his campaign promise of a Muslim ban.

It's fascinating to hear Yates' firsthand account of how the travel ban situation unfolded. In my opinion, Yates' interview provided substantial and somewhat jarring insight into the inner workings of the Trump administration, particularly in regards to transparency.