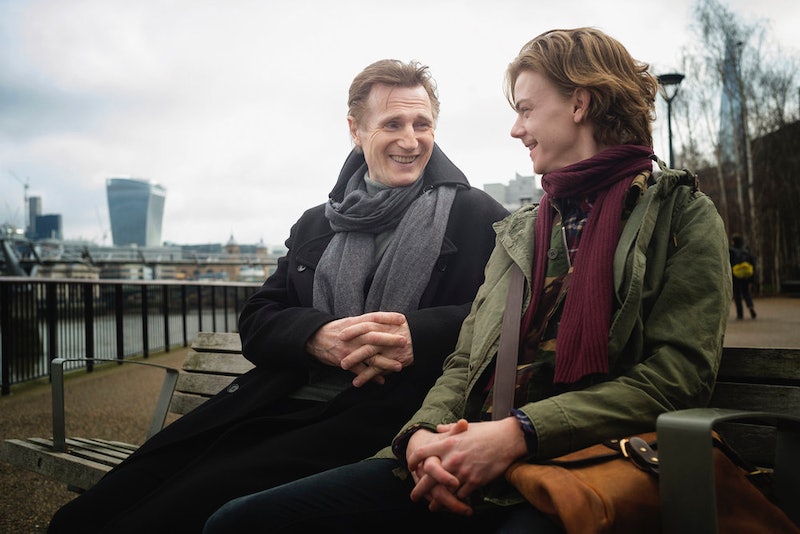 Of all the possible happy endings in the Love Actually Red Nose Day sequel, this one has got to be the cutest. Sam and Joanna are engaged in the Love Actually sequel. That lovesick wannabe Ringo Starr, who was mentored by Liam Neeson's character in the original film, actually ended up with his dream girl.

Sure, it's a little unrealistic to marry your childhood sweetheart, but the special makes it work. Sam lives in New York now, and ran into his old crush there. They reconnected, started dating, and now the two are visiting his stepdad in London — so that Joanna can ask permission to get engaged! That's a sweet twist on an old tradition. It all seems very natural.

"All you want for Christmas is this string bean," joked Neeson's character Daniel. That's nice that he remembered the song she sang at the pageant — though maybe he'll never get the drumming practice out of his head. It's not clear whether Daniel is still with Claudia Schiffer's character, but that's not important. His relationship with Sam was the most memorable. I like that they're still meeting on benches to discuss big things.

The fact that these two youngsters, now well into their 20s, kept in touch and found love it probably the biggest "revelation" of sorts in the Love Actually sequel. Joanna and Sam are not Kate and Leo after all. They're way better.