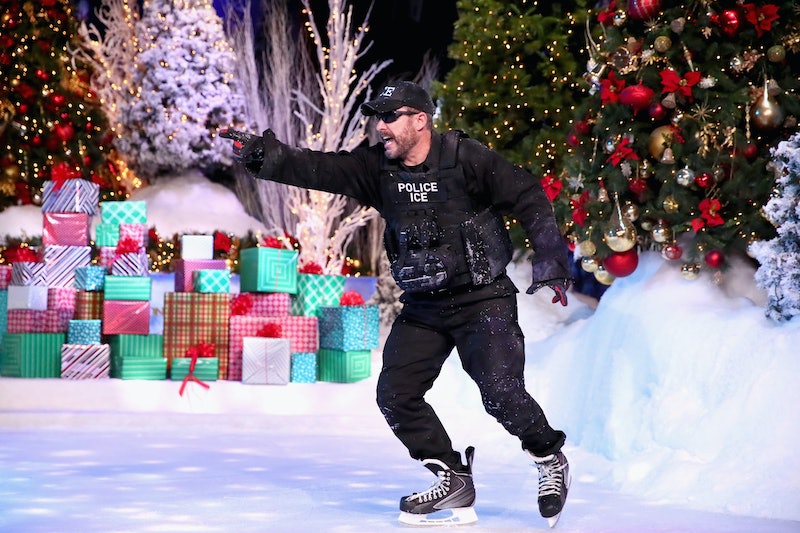 What do you do if you want to address a really serious issue, but you still want to keep things in the holiday spirit? In her "I.C.E. on Ice" segment, Samantha Bee came up with a fitting solution: put it on a literal ice rink. On Wednesday night's episode of Full Frontal, Bee got together with Olympic figure skater Adam Rippon to discuss how you can protect friends and neighbors who might be subject to deportation by U.S. Immigration and Customs Enforcement, or ICE.

"Welcome to 'I.C.E. on Ice,'" Rippon said to open the segment. He was closely followed by Bee's fitting description of the clip as "the only guide to fighting the excesses of Immigration and Customs Enforcement that's also an ice show."

"I really wanted to make sure that people knew their rights, and ICE is so awful this was the only way to make it Christmassy," Bee said in response to a question from Rippon about why she decided to do this segment.

The camera then turned to a small rink filled with graceful skaters, who Bee introduced as "The Full Frontal Abolish ICE Skaters." Their paired spins were quickly interrupted when fellow comedian Jason Jones, who also happens to be Bee's husband, entered the rink dressed in ICE gear.

"Represented by the worst person you encounter on the ice, a hockey douche," Bee continued. As that so-called "hockey douche," Jones slid around the rink disrupting everything possible, knocking over decorations, and even acting as though his hockey stick were male genitalia. Eventually, he dropped the stick in order to grab a fellow skater and spin him into a pile of wrapped gifts stacked next to the rink, ignoring all of Bee and Rippon's protestations.

"ICE is way too aggressive!" Bee said, following the crash caused by the marauding ICE skater. "But today we're going to show how you can legally help your friends and neighbors deal with them."

With the help of Jones and the other Abolish ICE Skaters, Bee gave numerous tips for those who may be pursued by ICE and those who want to help. For one thing, as Bee and Rippon explained, if ICE comes to your door, you don't have to let them in unless they have both an ID and a search warrant. This is a right that citizens still possess, even if the agency is "chipping away [at] civil rights" — as the segment demonstrated with Jones shooting hockey pucks at a closed door on the ice.

The skaters also showed how you can share documentation of ICE's activity on social media, thereby shining a light on any abuses of power. But as Bee explained, the best things you can do to impede ICE's work are actually at a larger level — organizing your community and its leaders to stop cooperating with the agency's activities, and, eventually, electing politicians who pledge to abolish ICE.