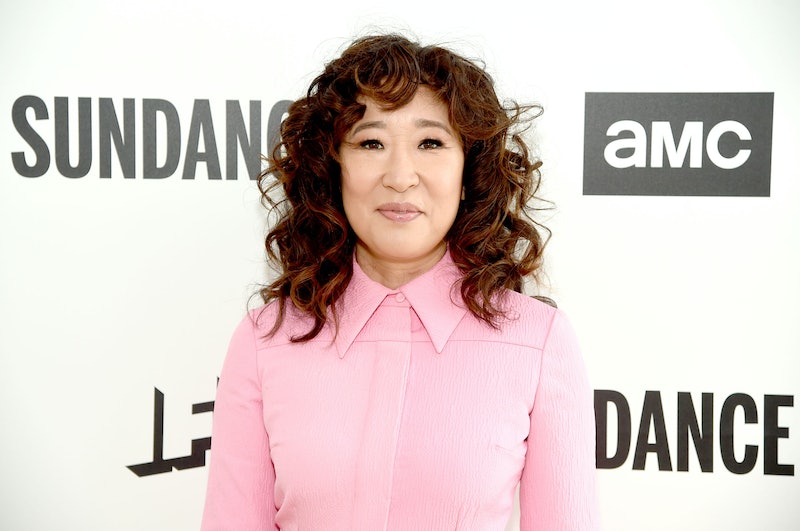 Former Saturday Night Live host Sandra Oh supported Shane Gillis’ firing by calling out his racist, homophobic jokes. The Killing Eve actor did not hold back in a series of tweets on Tuesday, Sept. 17 about SNL’s decision to part ways with Gillis just four days after the network announced his hiring. “Glad 2 see @nbcsnl decision NOT legitimize/give platform 2 purveyors of racist homophobic content," Oh wrote in her tweet. "Risks? LAZY ASS UNORIGINAL." She then followed up with a second tweet: “A tad late/vetting ? But glad to see. Looking forward to watching @chloe-fineman and my man @bowenyang ! Congrats!”

Earlier this week, SNL announced the addition of Gillis, Bowen Yang, and Chloe Fineman as full-time cast members for Season 45. Shortly after the announcement, however, several videos surfaced showing Gillis using slurs to refer to Asians and the LGBTQA+ community on his comedy podcast, Matt and Shane’s Secret Podcast, which caused outrage online. Oh’s recent tweets are in response to Gillis’ statement — shared on Twitter on Sept. 12 — that followed the backlash. “I’m a comedian who pushes boundaries," the statement read. "I sometimes miss."

The statement continued, “If you go through my 10 years of comedy, most of it bad, you’re going to find a lot of misses. I’m happy to apologize to anyone who’s actually offended by anything I’ve said. My intention is never to hurt anyone but I am trying to be the best comedian I can be and sometimes that requires risks.”

On Sept. 16, NBC confirmed Gillis' departure with an official statement from a spokesperson on behalf of Lorne Michaels. “After talking with Shane Gillis, we have decided that he will not be joining SNL," the statement read. "We want SNL to have a variety of voices and points of view within the show, and we hired Shane on the strength of his talent as a comedian and his impressive audition for SNL. We were not aware of his prior remarks that have surfaced over the past few days. The language he used is offensive, hurtful and unacceptable. We are sorry that we did not see these clips earlier, and that our vetting process was not up to our standard.”

That same day, Gillis offered a statement of his own on social media: “It feels ridiculous for comedians to be making serious public statements but here we are," Gillis wrote on Sept. 16. "I’m a comedian who was funny enough to get SNL. That can’t be taken away. Of course I wanted an opportunity to prove myself at SNL, but I understand it would be too much of a distraction. I respect the decision they made. I’m honestly grateful for the opportunity. I was always a mad tv guy anyway.”

MadTV has actually featured stereotypical Asian characters depicted by white actors while it aired from 1995 to 2009. The portrayal of Alex Borstein's Mrs. Swan, for example, has long been criticized as "yellowface." Similarly, Bobby Lee has adapted roles that perpetuated stereotypes in the show, such as his recurring character Bae Sung.

Nevertheless, Oh’s tweets about Gillis ended on a positive note: the Grey’s Anatomy alum congratulated Yang and Fineman in their new roles. And, really — Yang and Fineman's achievements should be the focal point of this situation.

More like this
Pedro Pascal Barely Got Through The "Lisa From Temecula" 'SNL' Sketch
By Stephanie Topacio Long
Michael B. Jordan Tackled His "Public Breakup" With Lori Harvey On 'SNL'
By Brad Witter
The Black Lotus Staff Has "Had Enough" In The 'White Lotus' Spoof From 'SNL'
By Brad Witter
Who Is Pete Davidson Dating? He & Chase Sui Wonders Got Caught Kissing
By Jake Viswanath
Get Even More From Bustle — Sign Up For The Newsletter
From hair trends to relationship advice, our daily newsletter has everything you need to sound like a person who’s on TikTok, even if you aren’t.