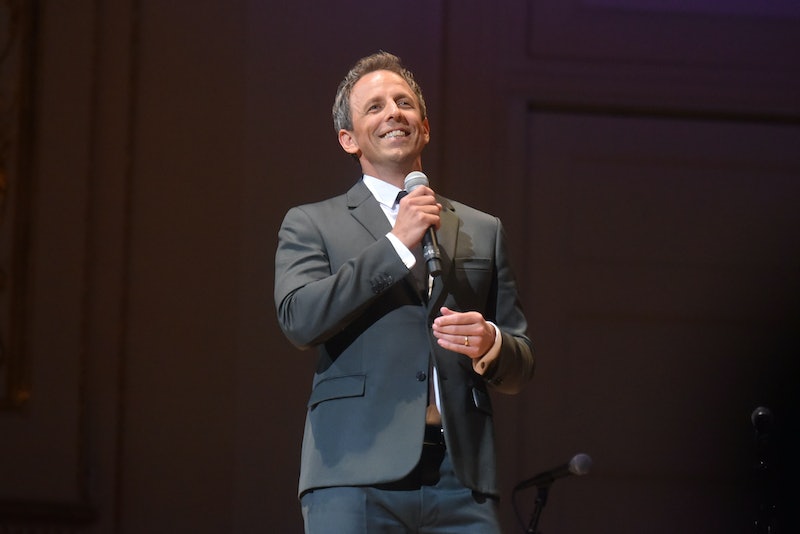 President Trump delivered a much-discussed speech from the White House on Tuesday evening, emphasizing why he believes a wall should be erected between the United States and Mexico. During and after his address, many took the president to task for his remarks, including Seth Meyers, who mocked Trump's Oval Office speech about the border to no end. Meyers — and other late night comedians — certainly didn't mince words when it came to sharing their feelings about the address.

The Twitter account for Meyers' show, Late Night with Seth Meyers, was frequently updated during Trump's speech. At one point, the account suggested that the address was more representative of a Saturday Night Live episode than a bonafide presidential speech "Somebody please add 'and live from New York, it’s Saturday Night!' into the TelePrompTer," the tweet read. At another point, the show's account questioned, "Is this Oval Office: SVU?," implying that the address was perhaps not giving off the vibe that Trump intended.

Meyers' show was certainly not the only one to offer some cutting commentary on Tuesday night. On his ABC show, host Jimmy Kimmel repeatedly mocked the president and his intentions. "This was Trump’s first address from the Oval Office," Kimmel said. "Up until now he’d been using it for Kardashian meet-and-greets, but tonight he got serious."

All the major networks covered his speech live and for good reason. It was historic. Rarely does a president of the United States interrupt primetime television to warn us about a completely made-up thing. He desperately wants us to be worried about this.

On the Twitter account for his show, CBS' Stephen Colbert shared a brief video ahead of Trump's speech. In the clip, Colbert noted that Trump's address interrupted CBS' scheduled programming of its show entitled FBI. Colbert then joked, "Not the first time he's [Trump] interfered with an FBI investigation."

Colbert continued to ridicule Trump, joking that the president might have an ulterior motive for delivering a prime-time address. As the comedian put it:

I think Trump gave that speech because he misses being on prime-time television. Next it's gonna be, 'Hello Shark Tank. I'm asking for $5.7 billion dollars for my border wall, okay? So far I have sold zero units. Also I am very afraid of sharks.

Over on NBC's Tonight Show, Jimmy Fallon also let loose when commenting on Trump's remarks. "Things got weird when he said, 'It can all be yours for five easy payments of one billion dollars,'" the host joked. Fallon also poked fun at how he imagined Trump would react to seeing his address aired on Telemundo, a Spanish-language television network. "When Trump saw footage of himself speaking Spanish he had himself deported," Fallon asserted.

These remarks represent just some of the extensive commentary made by comedians about Trump's Oval Office address. Trump's speech certainly drew a strong reaction from late night — and the hosts were definitely not afraid to make their opinions on the matter known.