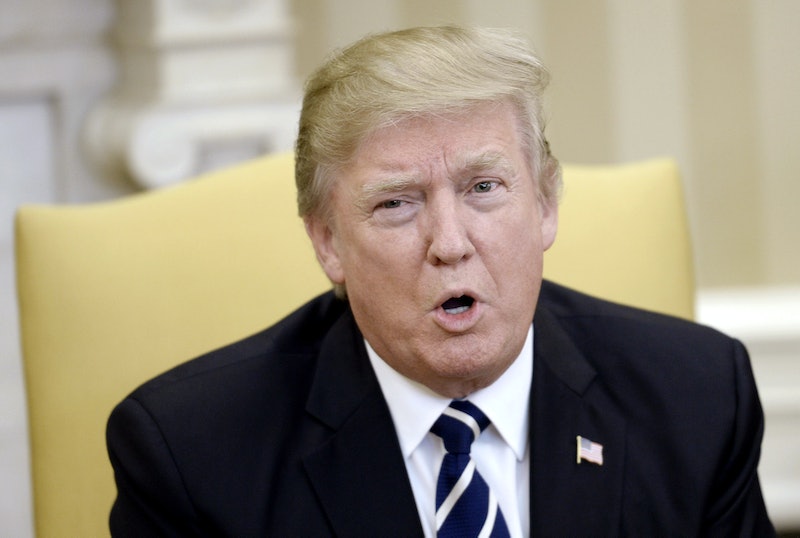 Have you ever thought about how great it would be if Donald Trump couldn't use Twitter anymore? How many fewer problems the country, and indeed the world, would have if the president of the United States would simply log off? Well, sadly, that's just a fantasy. But there's a new way you could possibly work out some of that frustration: watching a robot burn every single Donald Trump tweet.

It might sound too good or too strange to be true, but it's a real thing. An inventor and engineer named David Neevel whipped up a robot whose sole purpose is to print out everything Trump tweets, and then burn it. After the tweet is set flame, the robot dumps the remains into an ashtray.

In an interview with Slate, Neevel explained how he got the idea and committed himself to building the tweet-torching little automaton. Namely, he found what's been going on in American politics "disheartening and kind of troubling," and wanted to find a way to make it feel just a little bit better, even if only by making light of things.

I thought this was a nice way to just kind of make a comment on it and dismiss at least the Twitter aspect of what's going on. It seems like that's how people are picking it up, too: just a nice kind of ritual of dismissal of something unpleasant.

All the burnings are recorded and posted to Twitter, with the president himself tagged in. You can find all of them at the Twitter handle @BurnedYourTweet, and in all honestly, Neevel is right. There's a strange relaxation in watching the tweets get churned out (on what looks like receipt paper), snipped, burned, and dumped into a tray full of the remains of the day's previous tweets. He told Slate that he wanted to strike a "middle ground" between taking the situation seriously, and having a sense of humor.

The realities of what's going on are pretty rough, but completely shutting down and turning it off doesn't feel right, either. So some middle ground of still being aware and still keeping a sense of humor is a nice place to find if we can.

So if you've got a Twitter account and want to keep up to date on what the president's saying, but you can't stomach actually following his account, maybe this is your answer. Just follow the robot instead, and learn about whatever new scandal-inducing thing Trump tweeted just moments before you watch it go up in flames.