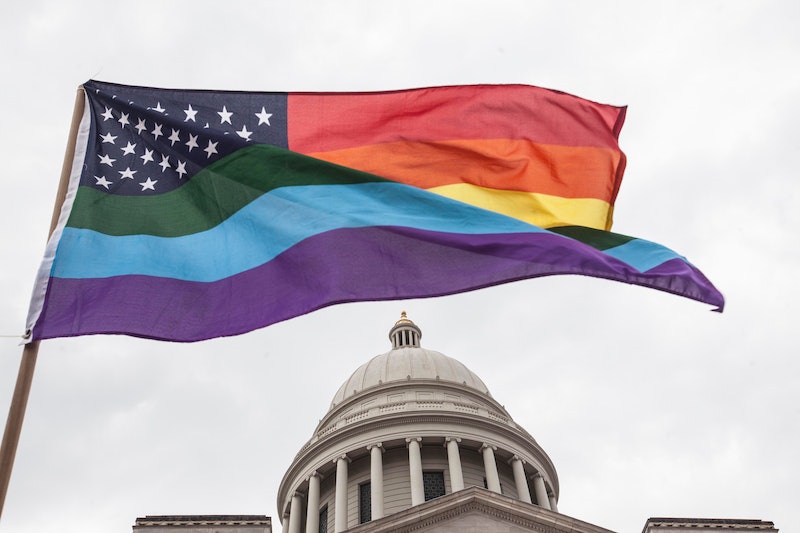 While the Trump Administration has sought to push a number of anti-LGBTQ policies, efforts to protect and advance LGBTQ rights at the state level appear to be working. According to the Human Rights Campaign, states passed more pro-LGBTQ bills than anti-LGBTQ laws in 2018, signaling a major change from previous years.

In 2018, a total of 201 pro-LGBTQ rights bills were introduced in state legislatures around the country, according to the 2018 State Equality Index, an annual report from the Human Rights Campaign Foundation and the Equality Federation Institute. Of those 201 bills, 21 were passed into law with nondiscrimination measures and so-called conversion therapy bans among the most common.

Comparatively, 110 anti-LGBTQ rights bills were introduced with just two becoming law. Both laws give religious-based foster or adoption agencies free reign to decline placement with LGBTQ people. They were passed in Oklahoma and Kansas.

Still, according to the Human Rights Campaign, the passage of just two anti-LGBTQ bills represents a significant change from previous years. In 2017, for example, state legislatures saw 129 anti-LGBTQ bills introduced with 12 of those passing into law.

"[the Human Rights Campaign] and our partners on the ground defeated dozens of anti-LGBTQ bills last year, and worked to pass crucial pro-equality measures that ensure LGBTQ Americans are protected wherever they live," Human Rights Campaign President Chad Griffin said in a statement.

LGBTQ advocates also reported that 2018 saw a rise in the number of states who earned the State Equality Index's highest ranking, known as "working toward innovative equality." The ranking is awarded to those states with "robust LGBTQ non-discrimination laws covering employment, housing and public accommodations, as well as protections in the areas of credit and insurance," the national LGBTQ advocacy group said. From 2017 to 2018 the number of states ranked as "working toward innovative equality" jumped from 13 to 17.

That being said, a whopping 28 states were ranked as "high priority to achieve basic equality," the Index's lowest-rated category. Indeed, the Human Rights Campaign has stressed that while states have passed more laws aimed at advancing LGBTQ rights than were designed to hinder them, there's still work to be done. "LGBTQ people still face the sobering reality that their rights are determined by which side of a state or city line they call home," Griffin said.

Rebecca Isaacs, the executive director of the Equality Federation Institute, echoed a similar message, noting that a strong state-based movement to advance LGBTQ rights was vital to promoting and improving things like representation, visibility, and equality across the country. "As we look to the next legislative session, the State Equality Index should serve as a recognition of how far we have come and how much we have yet to achieve," Isaacs said.

But while the Trump administration's anti-LGBTQ policies have outraged many, advocates are hopeful that next year's Index will continue to reflect improvements in the advancement of LGBTQ rights at the state level. "Already, we see the promise of even more protections passing in 2019," Griffin said in a statement. He said action toward advancing pro-equality measures has already been taken in New York, Virginia, Kansas, Ohio, Michigan, and Wisconsin.