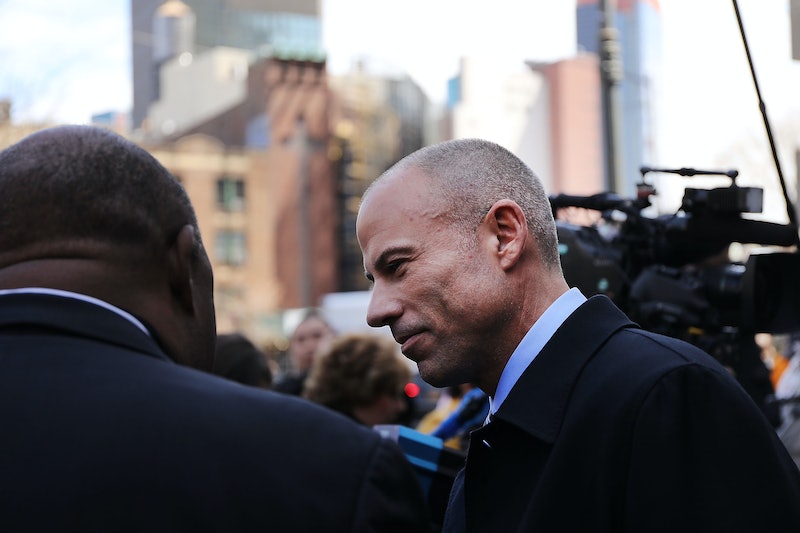 Sunday marked yet another day wherein the newest addition to Donald Trump's legal team dominated the news. And Michael Avenatti was there for it. This week, Stormy Daniels' lawyer said Trump and Rudy Giuliani are essentially unraveling their own story. And a lot of that has to do with how much they're talking.

The way he sees it, members of Trump's legal team have changed their stories each time a new detail has been revealed. And that, he suggested, is ruining their credibility. One of the most recent revelations happened last week, when Giuliani told Sean Hannity that Trump repaid Cohen for a $130,000 payment made to Avenatti's client as part of a hush agreement. The White House has denied allegations that Trump and Daniels had an affair.

For months, Cohen, who is one of Trump's lawyers, denied that Trump had any knowledge of the payout to Daniels. Instead, Cohen maintained that he had paid Daniels out of his own pocket, without informing Trump.

"I have to tell you I would urge people to go back and take a look at the statement that Michael Cohen issued back in late February or early March where he denied basically that Mr. Trump had reimbursed the payment. And he claimed he had done it all on his own," Avenatti said on Sunday. "I mean, we now know that that was an absolute lie."

The day after Giuliani's admission to Hannity, Trump acknowledged in a series of tweets that he had reimbursed Cohen for the $130,000 payout:

Mr. Cohen, an attorney, received a monthly retainer, not from the campaign and having nothing to do with the campaign, from which he entered into, through reimbursement, a private contract between two parties, known as a non-disclosure agreement, or NDA. ... Prior to its violation by Ms. Clifford and her attorney, this was a private agreement.

Trump described NDAs as common among the rich and famous, and said that his agreement with Daniels, whose legal name is Stephanie Clifford, was to stop "the false and extortionist accusations made by her about an affair." This was a marked change to how the president had previously spoken about Daniels and the legal entanglements between the two.

One month prior, Trump had told reporters that he did not know how Daniels had been paid. When asked if he knew where the funds to pay her had come from, he responded, "No. I don't know."

Cohen said in February that he had helped to organize the payment to Daniels, though he also said that he had not been reimbursed by the Trump campaign, nor the Trump Organization. In a statement to news outlets, he wrote:

Neither the Trump Organization nor the Trump campaign was a party to the transaction with Ms. Clifford, and neither reimbursed me for the payment, either directly or indirectly. The payment to Ms. Clifford was lawful, and was not a campaign contribution or a campaign expenditure by anyone.

While the future of the legal brawl between Trump's camp and Daniels' camp is unclear at this point, the story has demonstrably changed several times over. Avenatti and Daniels appear acutely aware of this, according to his comments on Sunday's Face the Nation.