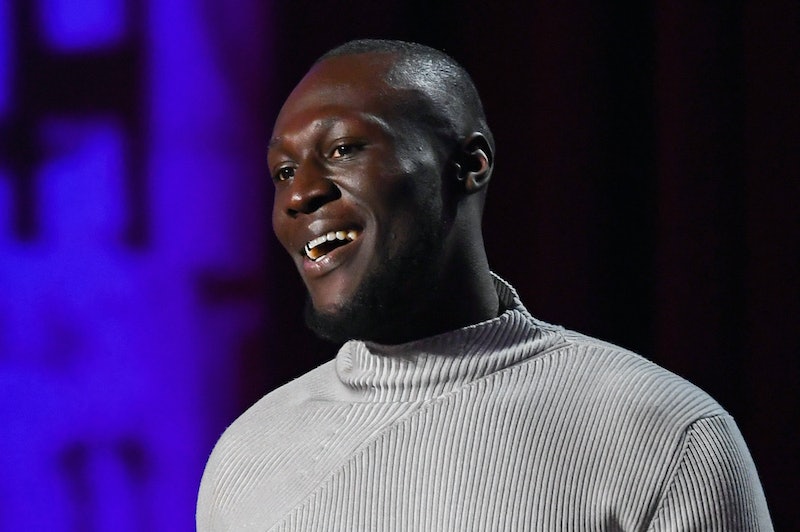 Brooklyn Beckham celebrated his 21st birthday over the weekend with a lavish party that came complete with a show from special guest Stormzy. Along with performing a medley of hits, the South London rapper mingled with party guests and, to the sweet surprise of onlookers, even danced with Brooklyn's little sister Harper.

The cute moment was captured on Victoria Beckham's Instagram story as the pair danced to Stormzy's smash hit "Own It" featuring Ed Sheeran and Burna Boy. David Beckham also posted a video of Stormzy hyping the crowd throughout his set, writing, "Stormzy creating special moments for Brooklyn. Big thank you!"

Held at the Beckhams' Cotswold mansion, Brooklyn's party appeared to take place under a giant marquee with disco lights and ice sculptures.

After dancing with Harper, Stormzy put his arm around Brooklyn before performing his last song speaking into the mic, "Your dad's legendary, your family's legendary, your surname's legendary and this is legendary so let's do this..." Bringing the energy all the way up, he added: "Right now I want to see everybody dancing". And that's what they did. Victoria even posted a shot of herself wrapped around her husband as David with the caption, "Dancing till 6am! Kisses and happy 21st birthday @brooklynbeckham X I love u so much @davidbeckham x".

Brooklyn is no stranger to the social scene so you would expect his guestlist to be nothing short of stellar – and boy was it. Elton John and Niall Horan were among those who attended the shindig and there was even a Spice Girls reunion! Emma Bunton and Geri Halliwell joined party goers and posed for a photo with their former bandmate's son.

All in all, Brooklyn's 21st party was everything we expected and more. And I for one can't wait to see what Harper's will be like...