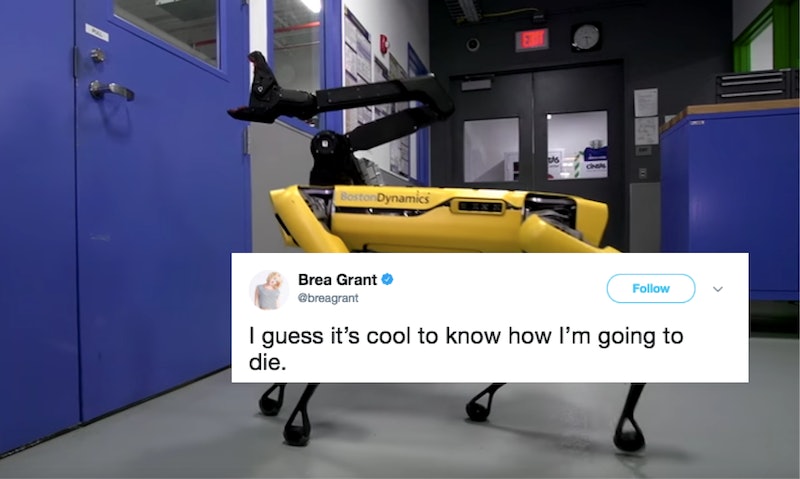 No, this isn't a sequel to I, Robot, although some might find it equally creepy. Boston Dynamics, a branch of the Massachusetts Institute of Technology that develops robots that move and behave like animals, is making headlines with a robot dog that can open doors, called SpotMini. They recently posted a video on their YouTube channel that shows SpotMini in action. The first robot approaches a door and pauses, unsure of how to proceed. That's when another SpotMini shows up to save the day, thanks to a long, protruding arm that grabs a hold of the door handle and opens it up. SpotMini demonstrated not only mind-blowing capabilities but impressive etiquette, as it held open the door for the first robot pup — a simple gesture many humans won't even offer. (WHY.)

This is likely promising and exciting news for dogs everywhere, who — for reasons unbeknownst to their humans — love coming into the bathroom while we pee. Doors? No big deal to SpotMini.

But also, can we please talk about how these robots move... as in, nothing like robots? As they trot through the open door, they almost mimic the excitement of a real dog as he realizes he's about to join you while you're sitting on the toilet. See for yourself.

Like it or not, robots are in our future, and they're getting more sophisticated with every passing day — like with how they can teach themselves hand-eye coordination. We're considering relationships with robots and even having sex with them. SpotMini seems harmless enough; but the implications obviously reach far beyond opening doors. Understandably, the robot pup is getting a lot of attention from the interwebs — and by attention, I clearly mean people are either terrified or impressed. Here are some of the funniest reactions.