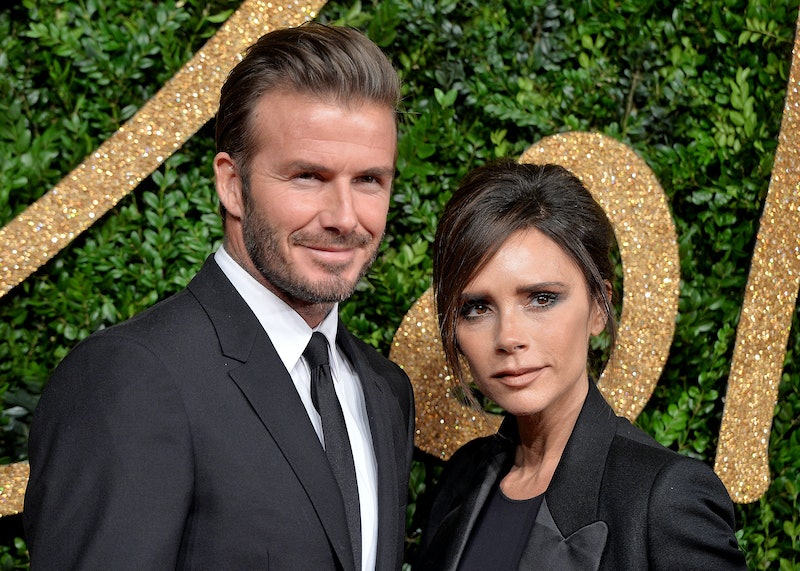 Everyone parties their own unique way to celebrate the New Year, and while I throughly enjoyed getting more than tipsy on two glasses of Prosecco and a Pina Colada with my family, flicking through my Insta stories and seeing how celebs were ringing in 2019 was making me a tad jealous. Out of all the celebrations though, the Beckhams New Year's Eve party totally seemed like the place to be.

According to the Daily Mail, the celebrations took place at their Cotswold estate where they enjoyed their own fireworks display and danced the night away to some banging tunes. Documenting the evening on their Insta stories, the Beckhams were having the time of their lives with David and his buddy David Gardner singing to Queen's "Bohemian Rhapsody," Victoria mum dancing to Rod Stewart and performing a little Spice Girls tribute to "Stop" with Liv Tyler, and David and Brooklyn swaying to Peter Andre's classic "Mysterious Girl". Someone needs to create a Spotify playlist, stat.

The family also posted some pics across their Insta accounts, including the same beautiful snap of the six of them together, and Victoria posing with daughter Harper with the caption "Girl power". Damn straight.

Joined by twenty of their closest friends according to The Sun, the Beckham's reportedly spent £30,000 on the festivities for the party including £4,000 on fireworks. To be fair, The Mirror reported that the fireworks used for the London display were expected to cost just over £3 million, so the Beckhams' budget for their NYE bash is modest to say the least.

This New Year's bash comes after a year full of speculation regarding the couple's relationship. But the pair put the rumours to rest with a statement from representatives which read:

And it just goes to show how strong a bond that the couple has with one another to get through that kind of speculation which I'm sure must pretty disheartening to see and read. Especially since David has been pretty open about their relationship in the past. "Of course you make mistakes and we all know that marriage is difficult at times," he said during a Radio 4 interview in 2017.

Time and time again the Beckhams have proved that whatever the rumours they're sticking together, which is certainly a testament to their strength as a couple and a family. Hopefully all the hearsay stops in 2019, because boy do they deserve it.

More like this
Here’s Everything You Need To Know About Operation London Bridge
By Bustle UK
What Exactly Is The Bish & Chips Show?
By Frances Stewart
Lauren Lyle Is Keeping The Contents Of Karen Pirie’s Bum Bag A Mystery
By El Hunt
Cheryl Remembers “Bright Star” Sarah Harding In Heartfelt Essay
By Sophie McEvoy
Get The Very Best Of Bustle/UK