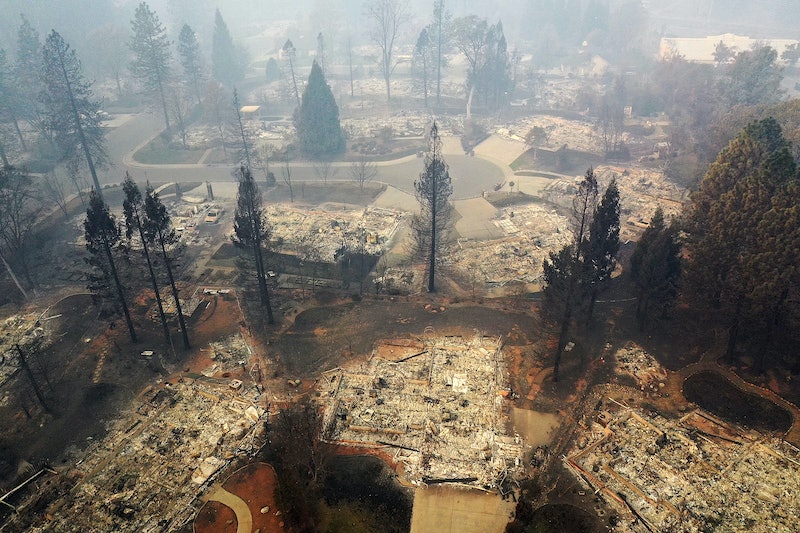 Most scientists agree that the increasingly destructive wildfires California is experiencing will only get worse if climate change progresses. Unfortunately that means costs of rebuilding in the aftermath are going to go up. The financial cost of California wildfire damage in 2018 is already astronomical, and it could keep climbing.

Between the massive fires that raged this November, 19,000 homes and businesses were destroyed across Northern and Southern California, according to The San Francisco Chronicle. On Tuesday, federal and state authorities estimated that cleanup efforts will cost $3 billion, more than double the $1.3 billion that the U.S. Army Corps of Engineers spent clearing debris after the 2017 fire season, reports The Chronicle.

Insurance companies are also a major part of funding rebuilding, though payouts this season might not be as high as last year. In 2017, according to NBC, insurers paid a record $11.8 billion to Northern Californians affected by fires. But on Wednesday, the California Department of Insurance reported about $9 billion in covered losses in 2018 — with the caveat that that number is expected to increase.

Insurance Commissioner Dave Jones warned earlier this year that damage will be harder to cover as fires get worse. "In the wake of last year's wildfires, we may see more areas of the state where insurers decline to write," he added, urging California lawmakers draft laws to "improve fire insurance availability."

Gov. Jerry Brown did end up signing a bill over the summer to help make the claims process goes more smoothly and ensure that victims get accurate payouts. But other more substantial bills, like one that would retroactively cover 2017 fire victims, even without a detailed inventory, have been stalled.

Mark Ghilarducci, director of the Governor’s Office of Emergency Services, told The Los Angeles Times that cleaning up this years fires will be "orders of magnitude" worse than previous years. He added, "It’s unfortunate that we’ve had to have back-to-back years where we have had such traumatic and catastrophic losses."

That trend is not just "unfortunate" — it might also be the new normal. The Camp Fire that burned across Northern California was the largest and deadliest in state history, burning more than 150,000 acres and claiming the lives of at least 88 people. And while it might not be a direct cause of an individual fire, Michael Mann, a Penn state atmospheric science professor, suggested to PBS that climate change is responsible for the increasingly devastating scale.

"You warm the planet, you're going to get more frequent and intense heat waves. You warm the soils, you dry them out, you get worse drought," Mann said on PBS NewsHour. "You bring all that together and those are all the ingredients for unprecedented wildfires."

In previous years, fire-fighting during the dry season could be something of a give and take between Northern and Southern California, according to Los Angeles County Fire Chief Daryl Osby. But with recent destructive fires coinciding in both regions, Osby told Time that might not be a situation the state gets to return to. "It’s evident from that situation statewide that we’re in climate change and it’s going to be here for the foreseeable future," he said.