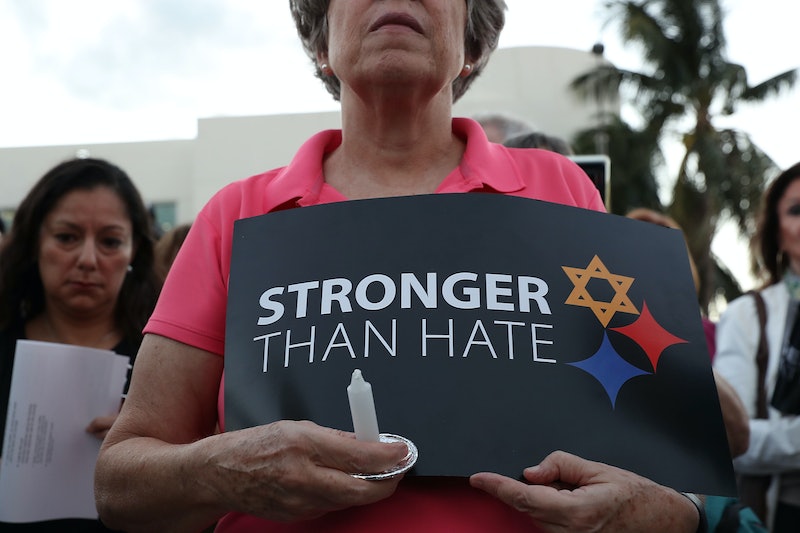 In spite of a recent shooting at a Pittsburgh synagogue that left 11 dead, the Countering Violent Extremism Grant Program is reportedly ending. The program was originally set up by the Obama administration, and was given $10 million by the Department of Homeland Security to award to a variety of groups around the country that worked to counter domestic terrorism. Now, the Trump administration is reportedly cancelling that funding. Bustle has reached out to the DHS for comment.

According to NBC News, the money for the Grant Program helped to pay for the development of new approaches to prevent domestic terrorism (including right-wing extremism and attacks on religious organizations). It also helped to fund training materials for law enforcement and mental health counselors to teach them how to better spot the early signs of extremism.

As NBC pointed out, this isn't necessarily a surprising move by the Trump administration: After POTUS took office, the funding was immediately put on hold. When the money was distributed six months later, there were several programs that were excluded, despite being originally slated to receive money from the program.

That included the only program that specifically works to fight ideologies related to white supremacy, a Chicago-based program called Life After Hate, which was supposed to receive $400,000. It received nothing.

Though the DHS hasn't publicly confirmed the cancellation of the program, recipients told NBC that they were informed by the DHS that the program was a "one-time" funding opportunity. What's more, the DHS Office of Terrorism Prevention Partnerships has removed any mention of future funding from its site.

That's not the only anti-terrorism institution that the Trump administration has reportedly cast aside. According to The Atlantic, the interagency task force on Countering Violent Extremism that existed in the Obama era is no longer active, and only exists in name now. That task force reportedly included individuals from the FBI, the National Counterterrorism Center, and the Departments of Justice, Education, and Health and Human Services.

George Selim, the former director of the Office of Community Partnerships (which oversaw the task force) said to The Atlantic, "Under this administration, there’s been a precipitous decline in the dedicated staff and program funding devoted to combatting ideologically motivated violence.”

In the last few days, POTUS has incurred criticism for his response to the Pittsburgh tragedy. Most significantly, he refused a request by several local officials to delay his visit by a week or so, choosing instead to travel to Pittsburgh four days after the tragedy. Mayor Bill Peduto had urged Trump not to visit the city while they were still in the process of burying those who had been killed in the tragedy.

Similarly, Councilman Corey O'Connor stood in support of those who protested Trump's early visit. To CNN's The Situation Room, he said, "We’re sort of saying, ‘Now is not the time.’ Today, we were grieving, we’re going to be grieving for the next few weeks, and today wasn’t a time to draw more national attention to us."

Following his visit, Trump turned his time in Pittsburgh into a political maneuver. He tweeted on Wednesday, "Yesterday in Pittsburgh I was really impressed with Congressman Keith Rothfus (far more so than any other local political figure)."