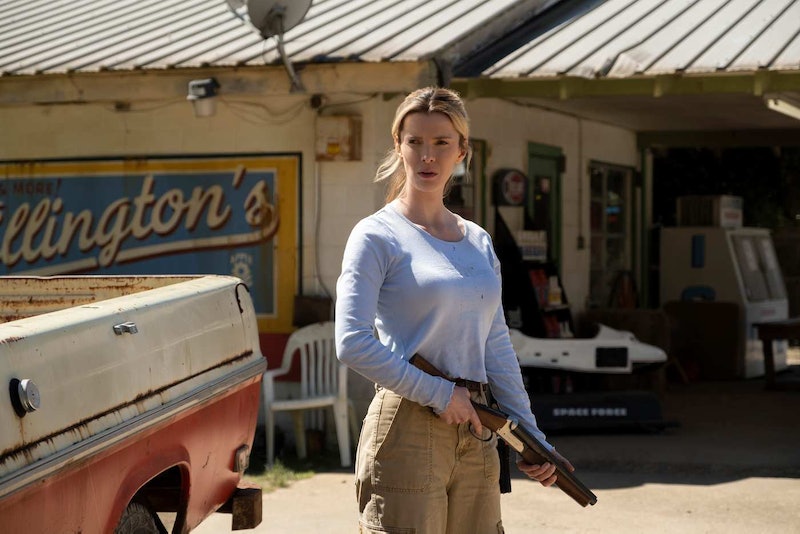 Because of the outbreak of the novel coronavirus, multiple movies that were supposed to hit theaters in the coming few weeks have postponed their release dates. Fast & Furious 9, A Quiet Place II, and the upcoming Bond movie No Time To Die are just a few of the movies that have delayed their opening days. But The Hunt — which was initially supposed to be released in September of 2019 and was held after public outcry — is now open in theaters. If you're not familiar with the controversy surrounding The Hunt, here's everything explained.

From Blumhouse, the same studio that brought The Purge, Paranormal Activity, and Insidious movies to theaters, The Hunt is a horror thriller based on the 1924 short story "The Most Dangerous Game" by Richard Connell. The film tells the story of 12 strangers who wake up in a field and learn that they are being hunted by "wealthy elites." The movie is a violent one, with liberals and conservatives in full bloody battles, toting guns, and fighting for their lives.

According to Vulture, the initial controversy surrounding the film began with the release of its trailer. When right wing media outlets heard the word "deplorable" — the descriptor Hillary Clinton made famous when talking about Trump supporters — was used in the film. It "catalyzed a mini-wave of anger" and "framed [the film] as a brutal matter of Blue versus Red, when, in fact, almost no one had actually seen the movie to argue otherwise," Vulture writes.

Shortly after, tragedy struck. The mass shootings in El Paso, Texas and Dayton, Ohio left 34 people dead. Between the shootings, backlash to the trailer, and executives and filmmakers behind the film receiving death threats, Universal decided to pull all advertising for the movie. That's when Trump weighed in.

Director Craig Zobel's denies Trump's assertion that the movie was made to create chaos. But he does admit that the movie, written by Damon Lindeloff and Nick Cuse, was was "intended to send up Internet conspiracies and the country’s ideological divisiveness," USA Today reports. The goal was to highlight how "people rush to assume something about someone or assume they understand the beliefs of people that they don't know just based on them being 'the other team.'"

Even so, the damage was done and Universal pulled the plug on the movie, cancelling its September release with no planned release. But back in February, a new trailer hit and The Hunt was rescheduled for release on March 13. You can now see what all the controversy was about for yourself, in theaters now.