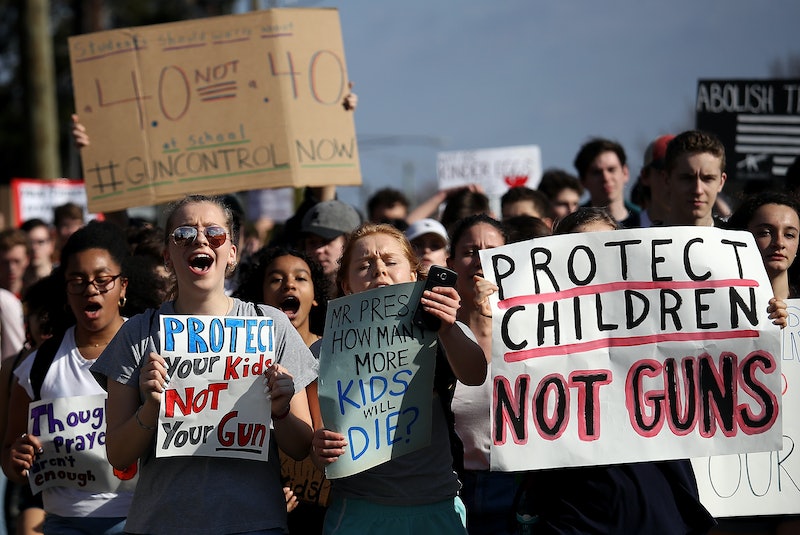 Students across the country will take place in the National School Walkout on Wednesday to remember the 17 people killed in the Parkland, Florida, school shooting last month. While each walkout is scheduled to last 17 minutes — one minute for every person who was killed — the ease of participating in your local walkout can vary, depending on which school district you're in. There are guidelines for the National School Walkout, so here's everything you need to know.

The protest came about in response to those killed at Marjory Stoneman Douglas, but unlike the March for Our Lives that has been directly organized by students at the school, this action has had help from other youth across the country.

EMPOWER, the Women's March youth group, is organizing the event, and it says that there are 2,545 walkouts scheduled so far ("and counting"). You can log onto their website to find the one nearest you. And if your school isn't having one, you can consider planning your own. The group has created a toolkit that guides you through the necessary steps.

EMPOWER points out that it's not just students at high schools that are participating, but that colleges are invited to join in, too. If you're participating, one key thing to keep in mind is that you are asked to wear orange, the color of the gun control movement.

On its explanation of how to start a walkout your school, EMPOWER makes clear that getting support from your parents or guardians can be crucial, and that you should let the school administration know about your plan. Your principal or another leader at your school could help you with information about how best to go about your protest with your safety in mind (like walking out into the hallways, rather than out of the building).

Students who don't think that their administrators will support them should realize that there are potential consequences for participating. Schools are prohibited from stopping free speech, but they can punish students for missing class. The punishment cannot be more severe for a political protest, but the same punishment that would be given for missing class for any other reason can be applied.

"What the school can't do is discipline students more harshly because they are walking out to express a political view or because school administrators don't support the views behind the protest," Vera Eidelman, a fellow at the ACLU focused on speech, privacy, and technology, wrote in a blog on the ACLU website.

The ACLU recommends that students check the policies of your school or school district to make sure that any punishment is in line with those policies. For students who are not citizens, it should also be noted that these same rights apply to you. Any Dreamers who are hoping to participate should take special caution not to break the law, but the school district cannot retaliate.

For those who don't want to face punishment, there are other actions they can do in school that can't face repercussions. The key is that the action can't be "disruptive," Eidelman writes. That sounds subjective, but wearing any clothing that supports the protest is clearly protected from past court cases.

There are specific demands that those participating in the walkout are standing for. The demand list states:

That means supporting specific bills in Congress, as well as opposing one that would enable "concealed carry reciprocity" across state lines. EMPOWER also opposes putting more guns in schools in laws like the one passed in Florida that opens up the ability for local districts to be able to arm and train teachers.

This also is not the last opportunity for students to protest in favor of gun reform. The March for Our Lives is coming up soon on March 24, and will be happening across the country — not just in Washington, D.C. That's a Saturday, so students can't get in trouble for missing school.